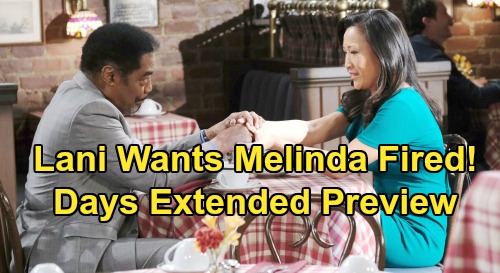 Days of Our Lives (DOOL) spoilers tease that the action will be really heating up on the NBC soap during the week of September 28. The Days of Our Lives extended promo is out, and it promises some movement on three major storyline fronts.

First off, DA Melinda Trask (Lisa Huang) will be on Eli Grant’s (Lamon Archey) case big time. It looks like Melinda will get the feeling that Eli isn’t really “into” helping her nail Kristen DiMera (Stacy Haiduk) for stabbing Victor Kiriakis (John Aniston) earlier this year, and she won’t be pleased.

Of course, viewers know that Melinda will be picking up on the fact that Eli is trying to protect Lani Price-Grant (Sal Stowers) and obfuscate Melinda’s investigation into Kristen.

Eli and Lani have a lot to hide, since Lani previously helped Kristen escape from police custody. That’s a big secret that Lani and Eli are keeping, and Lani has a lot to lose – like her job, or even her freedom since she helped a suspect evade the police. And since Lani is pregnant right now, Eli will really be in protective mode.

Well, Melinda is shown in the Days of Our Lives promo bellowing at Eli and saying, “I’m talking about a cop helping a suspect escape! Do not mess with me!” That doesn’t sound good for Lani at all, especially since Melinda is determined to bring Kristen down and probably anyone who helped her along the way.

Lani is shown in the promo asking her dad Abe Carver (James Reynolds) to make the problem go away by firing Melinda. We’ll see if Abe goes for it.

Meanwhile, Jan Spears (Heather Lindell) and Xander Kiriakis (Paul Telfer) will cause problems for Philip Kiriakis (Jay Kenneth Johnson). As viewers are aware, Xander will do just about anything to get Philip out of his way at Titan Industries, where they’re both Co-CEOs at the moment.

In the promo, Jan is shown with Shawn Brady (Brandon Beemer) telling him that Philip threatened to kill her.

Of course, that’s a true allegation, since viewers witnessed Philip’s threat against Jan. Xander will probably think that after getting into legal trouble, there’s no way that Philip will be able to remain as a Co-CEO at Titan, but it looks like his plan will ultimately backfire, as Sarah Horton (Linsey Godfrey) isn’t going to be happy about Xander’s obvious scheme.

“You were behind this, weren’t you?” Sarah is heard saying in the promo, as Philip gets cuffed by Shawn and hauled off to the Salem PD for his threat. Sarah later will tell Xander that if he does go back to his old ways, then it will be over between them.

That should be enough to snap Xander back into line for the moment – after all, Sarah means everything to him.

Finally, Days of Our Lives viewers will see some action when Ben Weston (Robert Scott Wilson) has a heated exchange with Vincent Bellman (Michael Teh). Ben is shown roughing up a smirking Vincent at the Salem PD and telling him to talk or else.

Days of Our Lives spoilers say that Hope Brady (Kristian Alfonso) and Ben will have tracked Vincent down, and they’ll want to get some answers about what really happened to Ciara Weston (Victoria Konefal).

As DOOL viewers know, no remains were found in the car that exploded, and for a while it seemed that Ciara was in that car, but now Hope and Ben are operating under the theory that Ciara may have gotten out of the car in the moments leading up to the explosion.

Vincent was planning to whisk Ciara away in a plane, so it’s possible that this could have happened, with Vincent remaining behind.

We should be in for some tense moments as the week winds down – and hopefully we’ll get some answers about where Ciara is and what her fate might be.

We’re in for an exciting week, so stay tuned to the NBC soap! We’ll give you updates as Days of Our Lives news comes in. Remember to keep CDL at the ready so you don’t miss any of our latest Days of Our Lives spoilers, daily episode recaps, and news. We’ve got you covered!