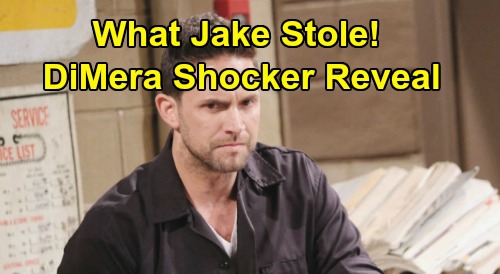 Days of Our Lives (DOOL) spoilers reveal that there’s a mystery that still needs to unravel – and it involves the item Jake Lambert (Brandon Barash) stole from “the family.” We know that it was something of value, and these people are willing to kill to get it back! What is this valuable item and why is it so important? Here’s what we know so far.

Jake saw this item as something that could be used as a bargaining chip, so he snatched it up. Of course, Jake certainly regrets that move now! After a massive argument with Gwen (Emily O’Brien), Jake ended up stomping off. Upon his return, Jake realized that Gwen had taken the item he stole when she cleaned the place out.

Gwen caught a flight to Chicago before heading to Salem – and that’s when the trail went cold. Does that mean Gwen knew exactly what she was doing when she stole this item? Was Gwen planning to deliver it to someone in Salem? That seems like a good option as we work through all the clues.

However, we have to point out that Gwen landed at Bayview. Did Gwen deliver the item as promised and then get betrayed somehow? Did Gwen’s mission get sidetracked instead? It’s tough to say exactly what Gwen’s deal is just yet, but this chick is intense!

Gwen is clearly more unhinged she thinks she is since she argued that she’s not like those other “whack jobs.”

Whether Gwen still has this valuable item or not, it still doesn’t answer the question of what that item is. The fact that Days is staying so hush-hush about it makes it seem like it’ll be something DOOL fans recognize.

This storyline also appears to be connected to the DiMeras, which makes sense considering Jake is probably Stefan DiMera (Brandon Barash). Jake’s reference to “the family” is certainly reminiscent of the “la famiglia” mantra, which brainwashed Chad DiMera (Billy Flynn) kept repeating.

Abigail tucked Stefano DiMera’s (Joseph Mascolo) Phoenix ring in a drawer after Chad’s trance was broken, so it’s still there as far as anyone knows. It seems like a stretch for someone to travel to Salem, secretly break in, steal the ring, take it back to Philly, have it stolen by Jake, stolen again by Gwen, etc. Then again, this is Days where people come back from the dead, so anything’s possible!

There’s also a chance Days of Our Lives simply wants to save this item as a new development rather than an “aha” moment. Think something along the lines of Serena Mason’s (Melissa Archer) elephant statue or the cursed amulet that Deimos Kiriakis (Vincent Irizarry) went after. It may be something none of us have never seen before – like a rare jewel or some piece of technology gear.

It could even be another microchip since Chad and Tony DiMera (Thaao Penghlis) speculated there could be more. What if Jake doesn’t know exactly what he took – only that it’s valuable to “the family”? The last remaining microchip of Stefano’s memories would be valuable.

Jake is also missing his Stefan memories, so that’s another option. What if Stefan’s memories were placed on a microchip and Jake doesn’t even know what’s what he stole? Regardless, this mob family could have some DiMera ties one way or another.