Days of Our Lives Spoilers: Who’s Threatening Jake – Could It Be Stefano DiMera Himself? 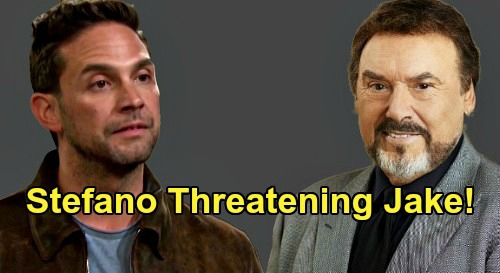 Days of Our Lives (DOOL) spoilers tease that Jake Lambert (Brandon Barash) is going to be in some real trouble soon. As DOOL viewers know, Ben Weston (Robert Scott Wilson) recently had a run-in with some thugs that someone sent to send a message to Jake. Mistaking Ben for Jake, the thugs roughed up Ben and certainly got their message across.

Of course, Jake claimed to the cops and to Ben that he had no idea who was behind the thugs’ sinister visit, although he later talked to someone via phone, telling them that their message was received.

Clearly, someone’s out to either get something back from Jake, like money he owes, or they’re out to keep Jake in line for some reason. It could be as simple as that Jake owes a loan shark some money for a gambling debt, but we doubt that it’s that cut and dried. What if the person who sent the thugs wanted to send Jake another kind of message?

Well, it seems that in the coming days, Jake will face more pressure from the person or people who have this beef with him. According to DOOL spoilers, Ben will find himself in danger once again, with Ciara Brady (Victoria Konefal) coming to his rescue. It looks like whoever is after Jake might come back to the garage and encounter Ben once again.

Days of Our Lives spoilers also indicate that Gabi DiMera (Camila Banus) will wind up kidnapped – which is something that Jake will wind up telling Ben and Ciara about. It looks like he could avoid going to the police once again, and we could see Ben, Ciara, and Jake handle the situation on their own, at least for a while.

Whatever the case, someone pretty major must be behind all of these messages, and of course behind Gabi’s kidnapping. But who could it be? Well, we can’t help but remember that right before Stefano DiMera aka Steve Johnson (Stephen Nichols) underwent his operation to remove the microchip, he and Wilhelm Rolf (William Utay) put their heads together and seemed to have some sort of plan.

What if Rolf managed to take Stefano’s “essence” once it was out of Steve’s body, and implant it into someone else? Might Stefano himself be inhabiting someone else’s body at this point and be calling the shots behind all of these weird occurrences in Jake’s life?

After all, it’s quite likely at this point that Jake is really Stefan DiMera (Brandon Barash), and if that’s the case, then Stefano could have some plans for his son.

Stefano tends to work in mysterious ways, so he could be responsible for Stefan’s resurrection (assuming Jake is indeed Stefan) and he could be trying to control Stefan’s actions for some reason. It could even be a situation in which Jake is Stefan but he doesn’t know it yet, and Stefano is playing some kind of weird games with his son.

We’ll see what happens here, but there’s certainly something going on beneath the surface with Jake, and time will tell whether or not it’s all due to Jake really being Stefan. What do you think? Could Stefano be behind all the weird things that are going on with Jake?

Stay tuned to the NBC soap and be sure to keep reading CDL for the latest Days of Our Lives news. We’ll keep you up to speed with the latest DOOL spoilers and daily recaps as well!