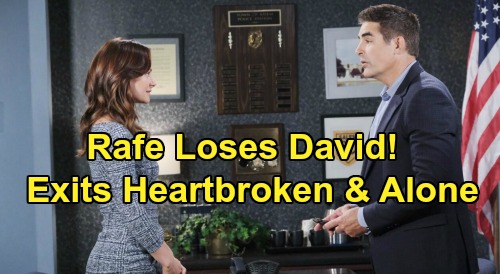 Days of Our Lives (DOOL) spoilers tease that things aren’t exactly looking up for Rafe Hernandez (Galen Gering) these days. Although he’s just managed to see Evan Frears aka Christian Maddox (Brock Kelly) get sent to prison for 20 years for the murder of Jordan Ridgeway (Chrishell Stause), he’s got some other pretty serious problems on his hands. As DOOL viewers are aware, Orpheus (George DelHoyo) is still running the streets, and now Orpheus has kidnapped David Ridgeway (Kyler Ends) again.

Rafe is going to have quite the ordeal on his hands as he frantically searches for David. It looks like Orpheus may have David hunkered down in the same location where he’s holding John Black (Drake Hogestyn), and chances are they’ll be difficult to locate. DOOL spoilers say that Rafe and Hope Brady (Kristian Alfonso) will search for David together.

It looks like Hope will be called in to work on the case along with Steve Johnson (Stephen Nichols) by Marlena Evans (Deidre Hall), who will want to find both John and David safe and sound.

Of course, Rafe will be beside himself while all of this is going on, and he may blame himself for leaving David in Zoey Burge’s (Alyshia Ochse) care. Of course, viewers know that Zoey tried to stall Orpheus from taking David, but ultimately Orpheus overpowered her.

At any rate, it looks like a big showdown is going to take place. It seems pretty clear from DOOL spoilers that Steve and Hope will manage to be heroes and redeem themselves for all the things they did when they were microchipped.

But Rafe will be in on some action as well, as DOOL spoilers say that he’ll be shot, and it looks like this could occur during a struggle to free John and David from Orpheus.

Whatever happens, it appears that David will come out of the whole situation unscathed, and that Rafe will find himself in a difficult position. Assuming that the custody case goes forward after the kidnapping ordeal with Orpheus is concluded, there still seems to be the very real possibility that Rafe could lose custody of David. After all, David has a stable, upstanding next-of-kin in Zoey.

We know that Zoey herself has kids, so she can probably make a pretty good case for why she should be David’s legal guardian. You might also know that Galen Gering, who portrays Rafe, will be leaving the show this autumn.

While it’s still possible that Rafe could leave under happy circumstances and go off to raise David, it’s probably more likely given Zoey’s presence in Salem that Rafe will lose custody of David and leave Salem heartbroken.

Rafe might not be able to face life in Salem without David. After all, it seems that Zoey and her kids must live outside of Salem somewhere, so she could take David and leave. That would surely devastate Rafe, and he might just decide to up and leave Salem for good.

We’ll see what happens here, but heartbreak could soon be in order for Rafe. Do you think that Rafe will lose custody of David in the end? Stay tuned to the NBC soap and be sure to keep CDL at the ready for the latest Days of Our Lives updates. We’ve got all your soap news and spoilers right here!