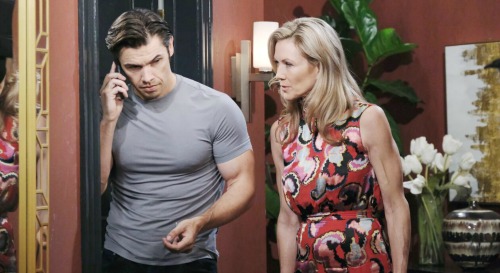 Days of Our Lives (DOOL) spoilers tease that Xander Kiriakis (Paul Telfer) is in a real bind. As DOOL viewers know, Xander was recently busted by Sarah Horton (Linsey Godfrey) for switching babies, and Sarah seriously lashed out and said that she never wanted to see Xander again. Xander did his best to convince Sarah to forgive him and run away with him, but it was to no avail. Instead, Sarah took off with the baby and hasn’t been heard from since.

Well, in the coming days, the race will be on to find Sarah. For Kristen DiMera (Stacy Haiduk) and Brady Black (Eric Martsolf), they’ll just want to hunt Sarah down and get their daughter back.

But Xander may have other ideas. Xander truly loves Sarah and would probably like nothing more than to run off and join her and the baby, then disappear for good. Xander would have his happy little family, and all would be well.

But it doesn’t look like that’s going to happen. However, Days of Our Lives spoilers say that Xander will manage to talk with Sarah on the phone at some point in the next few days.

According to DOOL spoilers, the hunt for Sarah will continue, and Sarah will continue to hide out in Paris, well after she talks with Xander, so it doesn’t look like she’s going to give up her location when she speaks to Xander on the phone.

In fact, Sarah will probably tell Xander to never contact her again, as she’s still going to be angry with him for setting this whole terrible situation into motion.

But one wonders whether “Xarah” is done for good, or whether Sarah will ever forgive Xander for what he did. We think there’s probably a good chance that Sarah will, but it will probably take a considerable amount of time for her to get beyond what Xander did.

Sarah will probably readily understand how Xander wanted to spare her the pain of losing her baby, but it will likely be much harder for her to come to terms with the fact that because of him, she fell in love with a baby that wasn’t hers.

But who knows – we could see a very soapy turn of events in which Xander and Sarah wind up in some terrifying situation down the road and Xander saves Sarah’s life or some such thing. Xander will probably need to be redeemed in Sarah’s eyes in a very poignant and dramatic way in order for her to forgive him.

At any rate, it will probably be a while before we see Xander and Sarah back together and happy again, but we have hope that it will happen. Do you think that Xander can ever redeem himself in Sarah’s eyes?

Stay tuned to Days of Our Lives and keep us bookmarked for all our soap updates. CDL is your go-to source for the hottest DOOL news and spoilers!