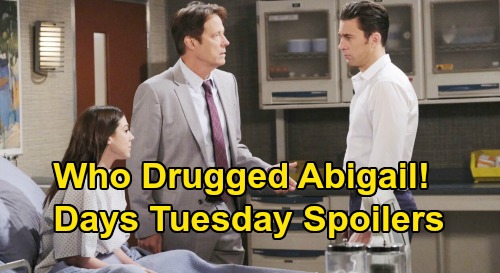 Days of Our Lives (DOOL) spoilers for Tuesday, April 28, tease that Justin Kiriakis (Wally Kurth) will have some devastating news to pass along. DOOL fans know that Rafe Hernandez (Galen Gering) was hoping to adopt David Ridgeway (Caleb and Kyler Ends), but a major snag got in his way. A red flag popped up in Rafe’s application since David’s nanny changed his name to hide a lengthy criminal record.

Rafe ultimately found out that Evan Frears is actually Christian Maddox (Brock Kelly), David’s biological father. Now David’s sister, Zoey Burge (Kelly Thiebaud), has decided to sue for custody of David, so Rafe’s got a lot working against him.

Unfortunately, Days of Our Lives spoilers say all of that should add up to failure. Justin will most likely admit this adoption isn’t happening – at least right now.

While Rafe deals with a tough blow, Kayla Brady (Mary Beth Evans) will last out at Steve Johnson (Stephen Nichols). Things are tense since Steve urged Kayla to be with Justin and took away her chance to make the choice for herself.

Kayla’s sick and tired of Steve making unilateral decisions about her life, so there’ll be more conflict in Tuesday’s new Days episode.

Since Kayla eventually decided maybe Steve was right about her future, she may mention that during her next outburst. Kayla might insist that she loves Justin and their life together, so Steve’s choice was the right one – even though Steve shouldn’t have made it for her.

However, Steve and Kayla have an unbreakable bond. They’re a Days supercouple that always comes back around, so a “Stayla” reunion will inevitably happen down the road.

In the meantime, Hope Brady (Kristian Alfonso) will give John Black (Drake Hogestyn) and Marlena Evans (Deidre Hall) a heartfelt apology. She’ll let them both know just how sorry she is for her behavior as Princess Gina Von Amberg.

Of course, Hope isn’t to blame for her actions during that time period. Dr. Wilhelm Rolf (William Utay) drugged Hope and put a microchip in against her will, which led to all the Salem mayhem.

Still, Hope can’t help but feel guilty now. It was her body carrying out these twisted plots, so she’ll apologize to “Jarlena” and hope they can forgive her.

Days of Our Lives spoilers say John and Marlena will reassure Hope on Tuesday. They certainly won’t hold Hope responsible for the chaos “Princess Gina” caused. Marlena and John will just be glad the real Hope has returned and can reclaim her life. Even so, Hope may battle more guilt as she tries to find a way forward.

Since Chad will accuse Gabi DiMera (Camila Banus) of drugging Abby later this week, Abigail indeed seems to have been drugged.

Gabi would be far too obvious, and she didn’t have time to put that kind of plan in motion anyway. Someone else has to be the culprit, so this will turn into quite a mystery! As other details become available, we’ll deliver more updates.

DOOL fans won’t want to miss what’s coming up for Abby. CDL’s your hotspot for exciting Days of Our Lives spoilers, updates and news, so don’t forget to stop by again soon.