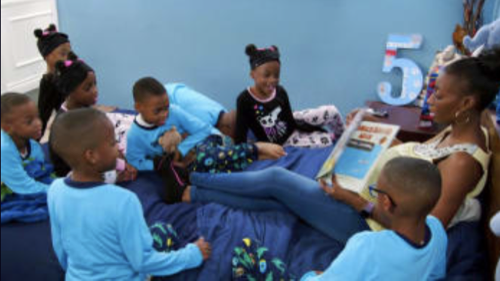 The stakes are running extra high, however, with their most recent set of triplets, who seem to be ready for the world well before their due date.”

Karen and Deon have eleven amazing children. They’ve had several sets of multiples back to back. Karen has been pregnant six times and she was even pregnant now. Karen is pregnant with triplets. This is not her and her husband’s first round of multiples. They’ve had multiples on both sides of their families and funnily enough, all of their children were conceived naturally. They have the most set of multiples known to man. Their children and the fact they have quintuplets without medical intervention is considered a miracle. A miracle that both parents have enjoyed. Karen and her husband Deon wanted a large family of their own and that’s what they’ve been blessed with.

Things were different for the couple. Deon has one sibling. He has an older brother and he often felt lonely as a child because his brother was always off doing his own thing. Deon, therefore, wanted a large family where his own children wouldn’t have to feel like he did. However, Karen has three siblings. She grew up in a larger extended family because she has nineteen cousins and so she loved going over to her grandparents. She thought having so many cousins was a great thing. She realized she wanted that for herself and that’s where Deon and Karen bonded. Deon and Karen met at the club one day. The deal-breaker was when Deon asked her how many children she wanted.

Karen had said at the time that she wanted as many as God would provide. Well, god has definitely provided. Karen’s pregnancies were a blessing and it was taxing on the body. Karen had to go on bed rest with multiplies and it was expected that she would go on bedrest again with her current pregnancy. Karen was also a stay-at-home mother. She was the one who was staying on top of the children and it was her husband who was a real estate investor. They’ve been lucky to provide for their children on one salary. They’ve talked about it as well and Karen asked her husband Deon to step up a little more around the house while she has to take her rest.

Karen didn’t want the kids to feel like their lives were on hold because she was pregnant. She tried to keep up with as many of the usual things. She especially enjoyed story time with the kids where she read to them and so she tried to maintain a few of their rituals. She has one thing with the children and her husband Deon has another. Deon has his own barbershop. He cuts his sons’ hair and it gives time to bond with them. Deon would ask them about their day. He would tell them that he didn’t want to be an empty nester and so the kids have to visit when they get older. Deon would be doing this as Karen holds her own salon with her daughters.

Hair is a big thing in their household. It was right up there with dancing because they love to dance and the adults taught their children to love to dance as well. Both Deon and Karen have tried to keep their home a happy home. They later went to the zoo for a family fun day and Karen had to be wheeled around in a wheelchair. She had some earlier contractions. She and her husband had to go to the hospital in the middle of the night and luckily it turned out to be nothing. It was just her body gearing up to have the triplets. She knew she wasn’t going to make it to thirty weeks because her last pregnancy didn’t make it past twenty-four.

Karen later had to say goodbye to her children because she had to book herself into the hospital. Her children took her leaving with sadness. They knew they were getting more siblings, but they didn’t really want to say goodbye to their mother. Even if it was for a short time and so there was plenty of tears to go around. The kids were going to miss mommy. They still had their dad only it wasn’t the same as before. Deon couldn’t be both parents and the one thing he and his wife did not want was for the older children to feel like they have to take care of their younger siblings. They wanted their children to love each other and want to help each other.

Neither parent wanted their children growing up too fast. Their oldest was already making a path for herself by doing things on her own like doing her own hair and that alone was hard for Karen who enjoyed her salon time with her daughters. Karen deputized her husband to do the girls’ hair with her away. He doesn’t do their hair as nicely as she does and so that was just one more thing the kids had to deal with. They are going to be without their mother for about seven to eight weeks tops. They also couldn’t go to her for their problems like they normally would have because Karen has to be calm while she’s on bedrest.

Karen has suffered miscarriages in the past. She also lost a child when she delivered twins rather than the expected triplets and so every care in the world is being taken with this current pregnancy.