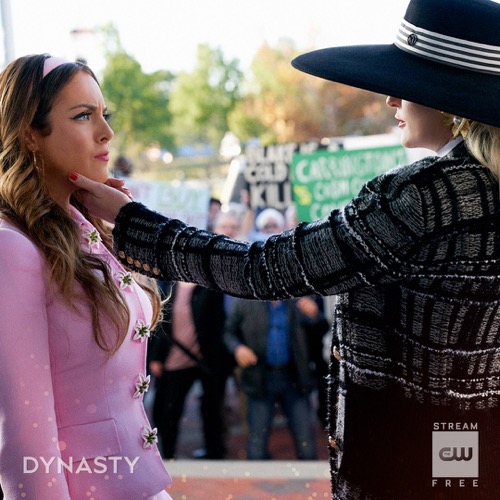 Tonight on the CW Dynasty the reboot of the 1980 series that followed the Carrington family airs with an all-new Friday, January 17, 2020, episode and we have your Dynasty recap below.  In tonight’s Dynasty season 3 episode 9 “The Caviar, I Trust, Is Not Burned,” as per the CW synopsis, “Blake’s trial continues as Alexis shocks the jury with her testimony. Following the scuffle between Adam and Liam, Fallon returns to the courthouse to find her mother has returned, newly married to her ex-fiancee, Jeff Colby.”

Fallon confronts Adam whose ribs are broken, she nudges him in the stomach to hurt and tells him that Blake is going to do worse when he finds out that he set fire to his precious vineyard. Adam says she is going to be blamed, not him.

At the courthouse, Jeff’s mother knows that she and her son are on bad terms, but tells him that Alexis is bad news. She asks him if he is in trouble, has she blackmailed him. Jeff says she is right, they are on bad terms and the only one using him is her, he can take care of himself.

Fallon shows up, Blake tells her that her mother is back with a new face and a stepfather for her that she met already, her former fiancé Jeff. Fallon approaches Jeff, asks him if Alexis has something on him. Blake gets a call, then asks Fallon why she burned his vineyard down, she tells him to speak to Adam who burned every last vine down.

Alexis takes her seat in the witness’ chair. She says that when she looked through the window and saw Blake strangle Nathan with his bare hands. Nathan turned on him after Blake ordered him to kill Crystal’s lover, Mark Jennings. Alexis says she will never forget the look of violence in Blake’s eyes, he killed Nathan Macintosh.

Fallon approaches her mother outside the courthouse, who tells her that she is so busy thinking her mother is the bad person that she doesn’t see the big bad wolf right beside her. Then Alexis says that when Blake is in jail for murder, it will give them more time to connect.

Fallon asks her father if Alexis is telling the truth. Blake says that she did not see what she said she did, she will be purging herself and he doesn’t deserve going to jail because she is lying. Fallon tells him they just need to prove that Alexis was not there. Anders walks in, Blake thanks her for believing in him, she leaves. Anders then asks Blake what will happen if Fallon learns the truth, Blake says nothing, because she is not going to find out. Blake asks Anders if he heard from Kirby, he says no.

Alexis is moving out, she tells Adam that she wants to put the past behind them and move on. He says that can’t happen, he is a Carrington and she is a Colby now, she made her choice.

Fallon brings a bottle wine over to Alexis and Jeff, says she wants to give them a peace offering and apologies to being crabby. Then she asks how this whole thing came about, but to leave out the parts that would make her sick to her stomach. Jeff says they met up in Switzerland, Alexis says that timing is everything. The two kiss, Fallon says she is going to the bathroom to throw up. Fallon actually sneaks into one of the rooms to go in the safe, she guessed the password being Blake’s birthday and finds Alexis’ agenda. Alexis calls for Fallon finds her in the room. Fallon says a photo caught her eye when she was on her way to the bathroom.

Adam goes to see Blake, tells him that it is all Fallon’s fault that the vineyard burned down. She paid Nadia to fall in love with him, set it up so he would hear Nadia talking to Crystal on how she was having an affair with him, and that she was only sleeping with him to make Blake jealous. Adam lost his mind for a while and set the fire to get back at Blake, but Fallon had orchestrated the whole thing. Blake says it is the most ridiculous thing he has ever heard. Why would he sleep with someone they hired to take care of him. Blake shouts at him, says he doesn’t care, he tried to destroy the one thing that means something to him in his life, while he is on trial for murder. Adam says he is going to make it up to him and leaves.

Alexis meets with Jeff’s mother at a bar and exchange caddy comments back and forth.

Alexis returns home, a bartender at Club Colby sent Jeff a photo showing him that she was having drinks with his mother. Jeff says he has to be able to trust her, she says he can, and the first thing to do is to put Blake away for a very long time.

Since Fallon took Alexis’ journal, she wants to prove that her mother was not where she says she was on the day Nathan was murdered, and could not have seen Blake do it. The first place she tries is a spa, where her mother had an appointment. She tries to get in, but can’t, she finds out that someone she knows has an appointment there, and goes to see her. Fallon comes up with a story, and manages to have the woman cancel her appointment, Fallon replaces her and finds out it was a spray tan appointment.

Jeff goes to see his mother and questions her about meeting with Alexis. She says she is worried about him, Alexis will do anything she can to get the money she has lost.

Fallon finds out the spray tan appointments take four hours, there is no way her mother could have been back home to see Blake kill Nathan.

Back in court, Alexis is called back to testify, she is asked to give a timeline of the night in question. Alexis says that she had her hair done at 6 pm, wrapped it in a turban, and took a bath. She just closed her eyes when she heard a blood-curdling scream, and then she saw Blake kill Mac. Alexis is asked if she could have made a mistake and been at a tanning appointment, she says no but even if she did confuse the two appointments, a spray tan only takes one hour. Mitchell says that Becky’s spray tans take four hours.

Liam asks Fallon what she thinks the jury is thinking. She says she is not comfortable with the fact that they have been deliberating for two hours.

Back to court, the jury is deadlocked, the case is claimed a mistrial, Blake is free to go. Blake thanks Fallon, she says if a daughter can’t save a father from the death penalty by exposing her mother’s lies, then what good is she. Outside the courthouse, Fallon tells Alexis to let go of her obsession with Blake.

Jeff’s mother is coming up the stairs to the courthouse, Alexis nudges her and sends her flying down the stairs.

Fletcher meets Sam, in seconds they share another kiss.

Alexis is upset, all of the society’s websites she is being called names. Jeff asks her if she pushed his mother, she says no. His mother comes in and says that she is scared for her life and is leaving, she is going to New York to have some quiet.

Anders tells Adam that Blake will see the error of ways by throwing him out.

Fallon goes to see Crystal, she hands her some papers, Mac’s family agrees that they won’t file a civil suit or bring this up again if Blake admits his guilt. She tells her that she hopes it was worth it. Crystal says she was so broken after the baby died, Blake couldn’t control his rage and lost it, and it is weird that he signed that without telling her. Fallon says he didn’t sign it, she wasn’t sure that Blake killed Mac until she just told her.