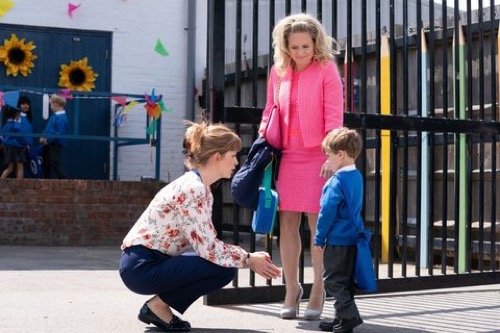 Eastenders spoilers previously teased Linda Carter (Kellie Bright) might lose her family before getting sober. On Wednesday night, fans watched as Linda’s drunken paranoia led her to basically stalk a social worker and the two had a tense chat as Linda tried to “explain” putting Ollie Carter (Harry Farr) in danger. Has her big mouth just ripped apart the family Michael “Mick” Carter (Danny Dyer) was trying to protect?

Social Worker Visits Carter Family – During the social worker’s visit to the Carter home, Linda had a difficult time coping. To help settle her nerves, she poured gin into her tea. The meeting between the parents and social worker seemed to go smoothly enough.

At least, until Linda got paranoid when she saw the social worker and Mick having a hushed conversation. Then, she assumed the worst and was determined to fix it.

Linda Carter Tries to Explain – This led to her following the woman to a restaurant. In fact, the social worker even asked Linda outright if she followed her there. In Linda’s buzzed state, she thought she was fixing the damage. Eastenders spoilers tease the social worker had no idea that Ollie was ever in danger. This could change things forever for the Carter family.

Eastenders Spoilers: Mick Carter’s Choice – It is suggested Mick will have to make a difficult choice. He will probably be given an ultimatum by social services. He either keeps Linda in his home but lose Ollie, or makes his wife leave their home until she gets help. It seems that his mom was right all along and Mick probably should’ve listened to her. Ollie has to be the priority as he is just an innocent child.

Liquor’s Lure Too Strong to Fight? – Eastenders spoilers imply Linda could not only lose her husband, but her child too. She clearly isn’t ready to get sober either. Screenshots from the trailer for the 35th anniversary special indicate she keeps partying it up. Does she have any intention of getting her life together or has she simply given up? Is there any hope for the Carter family after this?