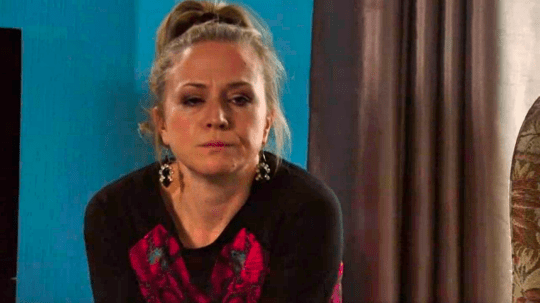 Eastenders spoilers tease Linda Carter (Kellie Bright) spikes her own tea in order to deal with the stress of a visit from a social worker. However, she gets paranoid and thinks the social worker and Michael “Mick” Carter (Danny Dyer) are talking about her. Drunk from the tea, she chases after Loretta Perkins (Sarah Finigan) and ruins everything for her family. Will she lose custody of Ollie Carter (Harry Farr)?

Linda Carter’s Alcoholism Storyline – Since late last year, Linda has dealt with a drinking problem. However, she refuses to accept that she can’t handle booze anymore. She has made several promises to cut down but as everyone knows, addicts can’t just drink in moderation. They need to stop hitting the bottle period.

It’s getting so bad that she might actually lose her family, which actress Kellie Bright hinted might happen when speaking at a press event back in December.

Mick Carter Giving Up – Eastenders’ spoilers indicate Mick is starting to give up on his wife. She has broken promise after promise. She has put her little boy in danger. She can’t remember that night she fled from a man who tried to force her in bed (which is bringing up cheating allegations even though she’s innocent). She witnessed the near murder of Keanu Taylor (Danny Walters) and now knows that he’s in hiding or he really will be killed.

There’s so much going on and Mick really has no clue that Linda can’t deal with it all on her own. That is partly what is driving her to drink, even though that’s the worst thing she could be doing right now.

“We’re family… we’re gonna get you through this.” #EastEnders pic.twitter.com/vRpWIsErTw

Eastenders Spoilers: Spiking the Tea – During the week of February 10, expect the Carter family to get a visit from the social worker. To deal with Loretta’s visit, the family acts united. However, Linda gets the bright idea to spike her own tea with gin to settle her nerves.

Later, she spots Mick and Loretta speaking privately and assumes the worst. She later confronts Mick and lashes out for him talking about her to the social worker. Then, things go from bad to worse.

Social Worker Chased By a Mad Drunk Woman – Before Mick has a chance to explain, Linda will decide to chase after the social worker. Drunk from the spiked tea, she catches up with Loretta so she can have her say. However, it is suggested that she might end up ruining everything for her family. Will Mick be given an ultimatum to choose his wife or his son? Fans will have to keep watching the find out.