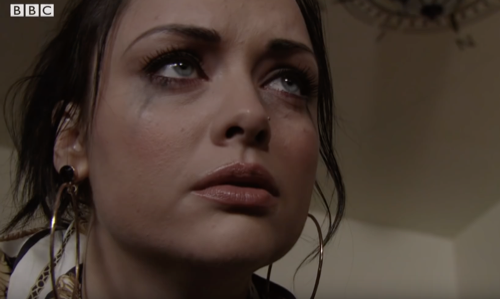 Eastenders spoilers reveal Leo King (Leo Cameron) is hiding in Whitney Dean’s (Shona McGarty) attic. He is watching her and listening to everything she says. It’s stalking to the extreme and will seek revenge for his father. Things will come to a shocking conclusion when she is horrified to find Leo in her room. It is teased that one of them will end up with blood on their hands, but which one will survive?

Stalking Whitney Dean – For what seems like an eternity, Whitney has been dealing with Leo and his dangerous stalking. He even hid the fact of who his father was after she ended up in a hotel room with him. Once she realized the truth, he tried to get her to recant and was recording it on his phone. However, she wasn’t going to give in that easily, despite being terrified and making him believe that was what she was going to do.

Over the past few weeks, his stalking has not waned at all. Things are going to take a tragic twist next week.

Hiding in the Attack – Leo is hiding in the attic in an attempt to watch her every move and listen to her every word. It is a level of stalking that not many people have ever experienced. So, things are really coming to head soon because he won’t stay hidden forever.

The whole square standing up for Whitney! @ShonaBM is spectacular! ?? #EastEnders pic.twitter.com/PBmzRPsN93

In fact, he is listening when she admits to the police that Tony King’s (formerly Chris Coghill) letter is missing. In fact, Eastenders spoilers indicate there is a pretty good chance that Leo is the one that stole it.

Eastenders Spoilers: Horrifying Discovery – It is confirmed that next week, Whitney spots Leo in her room. She is in serious danger and she now realizes just how close he has been all this time. How will she get out of this terrifying situation? He is determined to get revenge for his father. Based on everything he has done to her so far, there is no telling how much further he will go to do that.

A Bloody Mess – Eastenders spoilers tease that one of them will end up with blood on their hands. However, which one will it be? We certainly hope that Whitney survives and that it’s Leo who ends up losing the final battle. To find out how this storyline ends, keep watching the British soap opera.