Eastenders Spoilers: Will Gray Find Out the Truth About Whitney’s Secret? Mick’s Involvement Could Be Exposed Soon 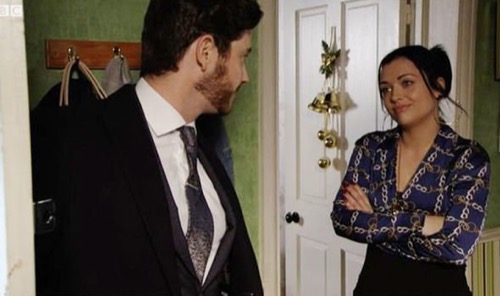 Eastenders spoilers for the week of February 24 reveal that Gray Atkins (Toby-Alexander Smith) will agree to be Whitney Dean’s (Shona McGarty) lawyer. However, he suspects that his client isn’t telling him the truth about what happened that night. As fans know, it was self-defense, but she never told anyone about Michael “Mick” Carter’s (Danny Dyer) involvement. Could the truth come out soon?

About The Night Leo King Died – The night of the tragic boat party, there was another death. That individual was creepy stalker Leo King (Tom Wells). Whitney ended up killing him in self-defense. However, she was afraid of how it would look to police and recruited someone else for help. That person was none other than Mick Carter, who gave her specific instructions to dispose of the wiped knife while he took care of the body.

However, nothing went according to plan and soon, Whitney would end up under arrest.

Whitney Dean’s Secret – Eastenders spoilers reveal Gray will have reservations about taking Whitney on as a client. However, he reluctantly agrees and goes to get her version of the story. She tells him everything, except for a few small details. That includes her calling Mick for help the night Leo died. In fact, she is asked point-blank if she called anyone after she committed the murder and she said no, which is a big, fat lie.

Eastenders Spoilers: Gray Atkins Suspicious – It is teased that Gray will become suspicious that Whitney isn’t telling him everything. In this day and age, Whitney should already know that phone records can prove she made a call, and to who. It is only a matter of time before the truth comes out and how will she explain lying? She should have told the complete truth from the very beginning. If not to the police then at least to her lawyer, who can’t defend her properly unless he knows everything.

Mick Carter’s Involvement To Be Exposed? – Eastenders spoilers suggest that Mick’s involvement in the crime will be exposed soon. How will he explain his side of the story? How will this affect Linda Carter (Kellie Bright) and their son, Ollie Carter (Harry Farr)? What will happen next and could he face any charges, even though he was only involved after the fact? Fans will have to keep watching the British soap opera to see how this storyline develops over the next few weeks.

Be sure to catch up on everything happening with the soap right now. Come back here often for Eastenders spoilers, news, and rumors!