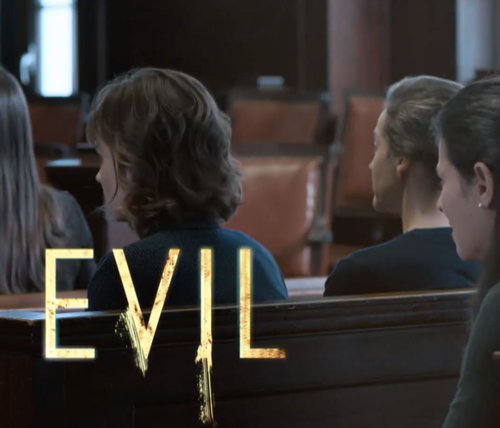 Tonight on CBS Evil airs with an all-new Thursday, January 16, 2020 episode and we have your Evil recap below.  On tonight’s Evil season 1 episode 12 “Justice X 2,” as per the CBS synopsis, “As Leland assists convicted serial killer Orson Leroux with having his conviction overturned, Kristen is called into court to testify while her daughter, Laura, undergoes emergency heart surgery.

Also, while paying a visit to a woman in need of spiritual advice, David fears for his safety after witnessing her evil instincts firsthand.”

Tonight’s Evil season 1 episode 12 airs and looks like it is going to be great and you won’t want to miss it. So make sure to bookmark this spot and come back from 10 PM – 11 PM ET for our Evil recap.  While you wait for the recap make sure to check out all our Evil recaps, spoilers, news & more!

Several comedians take the stage to give their skits. One comedian, who uses an accent on stage, talks to a female comedian after he gets off stage. She invites him back to her house. A gun falls out of his coat. He has been jumped coming home several times, he explains. She shares some of his favorite jokes she has heard. She apparently is a fan. One joke makes him uncomfortable. He asks who she is. She doesn’t understand why he would ask that. When he heads to leave, she knocks him out with a liquor bottle.

Kristen heads to go to work when she finds her husband chanting outside. She didn’t know he practiced Buddhism. Meanwhile, Ben brings David to a new job, someone who needs spiritual advice. David meets her, her name is Sonia, it is the woman who struck the man with the bottle.

Kristen is in court listening to a killer on the stand. Leland shows up. Back at Sonia’s, she tells David she has been hearing a voice. It is God, telling her to kill. He tells her God would never do that. She hears the tea is ready when he spots blood droplets. He follows the trail to the cellar door, opens it and hears a moan. Sonia strikes him from behind. He falls down the cellar stairs. She locks the door.

Kristen is in court still when her husband leaves her a voicemail. The doctor wants him to bring their daughter in right away. Her labs came in. They look bad and she may have to have a procedure done to her heart.

In court, Kristen tells the lawyer to take a recess. She has something to tell him about the case. Meanwhile, Sonia comes down the stairs. David needs a doctor. He is hurt. Sonia plays a skit from a disc jockey who encouraged violence against Tutsi women. She believes the man, Lando the comedian, she has in the basement near David is the disc jockey. The man swears it is not him. David encourages to ignore the bad voice and listen to God’s. She cuts off Lando’s ear.

Kristen’s husband is told their daughter needs a cardiac catheterization now. He panics and tries to call Kristen again. In court, Kristen takes the stand to detail how the suspected killer attacked him. His lawyer comments on how Kristen taunted him.

David and Lando scream for help. A woman hears them and rings Sonia’s bell. Sonia is angry but answers the door. She lies and says everything is fine. She tells her she is watching a horror movie. The woman doesn’t believe that. Sonia tells her that she and her husband have been role-playing. The woman gets it, laughing as she leaves. Ben arrives but leaves when Kristen’s husband calls him and asks him to go to the court to tell Kristen what is going on.

Leland taunts Kristen at recess. He tells her that her testimony was weak. Kristen rips him apart in a second – she knows his back story. He was once Jake from De Moines until he changes his name and moved, divorced and went back to college. He used to play the tuba. He is nothing and can do nothing to her. She laughs at him and takes off.

Ben take Kristen to her husband and the girls. Meanwhile, David tells Lando to confess. He tells Sonia he did say those things but he was paid to do it. He never really did it. She details her own struggles and what happened to her and her sister. She becomes angry and puts a gun to Lando’s head. She pulls the trigger. She calls the police and reports it. David is completely stunned.

The judge lets the killer off. Kristen and the girls all talk. Laura, her daughter, has been healed, the doctor tells them. Later, Kristen asks her husband what he was chanting this morning. The girls have picked up on it too. He tells her it’s a “give take” mantra. He offered his life for Laura’s. Kristen cannot believe he did that. He chuckles, its just a chant.

Leland is sitting with the devil telling him all about Kristen. She basically emasculates him. The devil tells him not to react but they may eat her heart toggle at some point.