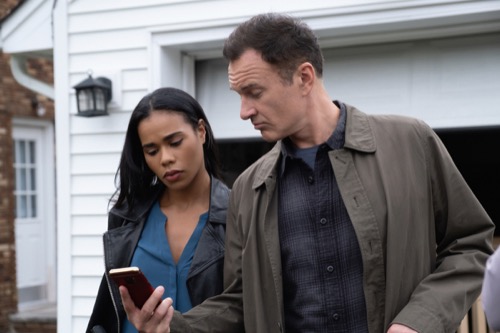 Tonight on CBS FBI airs with an all-new Tuesday, April 14, 2020, season 1 episode 11, “Ironbound” and we have your FBI recap below. In tonight’s FBI season 1 episode 11 as per the CBS synopsis, “After a small-town police officer claims he’s the victim of a deep-rooted conspiracy and begins taking revenge on those he believes are responsible for his downfall, Jess and the team find he just might be right.”

A man dressed in an officer’s uniform walks into a diner and shoots a man sitting with a woman. At home, jess looks for his daughter. Her grandmother is worried. Seconds later she comes in. He tells her she can’t just take off outside without letting them know. He is called to the office. At the office, he is told about a man dressed in uniform who walked into a diner and shot two state troopers.

Jess and the team head to their suspect’s house. It appears the officer, last name Clark, has a pristine house with a baby crib in the garage. The neighbors all tell them that he made them feel safe. They say that he has a girlfriend in New York named Elise.

They track down a lease. She tells them that he is moody and they have not been together for quite a while.

Clark is in a park. He talks to a kid near the lake. He calls in to report a homeless man giving a police officer a hard time. He poses as the homeless man with a blanket over himself on a bench. When a female cop comes up to speak with him he shoots her in the head and leaves her body in the park. Jess and his team arrive to investigate.

Back at the office, they discover Clark and the female officer went to school together. They find a video of him and how the truth is very important to him. Their research leads them to a man whose son was killed by Clark. They go to speak with him and he believes Clark killed his kid out of revenge. They were both involved in a raid and things went bad. This must be the reason for Clark’s video about the truth.

The team gets word that Clark has been involved in another shooting. He shot at several police before escaping. The team looks into the raid and learns the local police raided the wrong house.

Jess holds a press conference, urging Clark to turn himself in. He mentions that he knows all about the raid and he wants to make things right. Later, Clark calls and talks to Jess. He tells him to stop looking for him. Jess offers to let him know about the raid investigation as it continues if he is willing to keep in contact with him. Clark tells him he isn’t going to stop.

They head to meet an officer who Clark was close to by the name of Ray. He tells them how Clark was a good kid and they were close but his wife became sick so he focused on her. He regrets that now. His wife has since passed away. Jess asks him to call Clark. He does, begging him to turn himself in. Clark isn’t willing to.

Jess and the team head back to the officer who lied to them about the raid. After getting some additional information about Clark’s relationships within the force, and about the raid, they send an email to Clark addressed from his friend Ray. He calls Ray and agrees to meet.

Jess and Ray head to meet Clark. They pull up to a barn. Clark tells Ray to get out alone. Jess tells him no but Ray jumps out of the car. Clark confronts Ray. He thinks Ray sold him out about the raid. Meanwhile, the team quietly surrounds the barn.

Jess tries to talk Clark into surrendering. Clark goes on a rant. He has been betrayed. He runs into the barn and sets it on fire. Jess runs in to help him. He saves Clark by smothering him with his coat. The ambulance arrives.

Jess heads home to see Tali. She is playing with the birds. They talk about the good times with her mom.