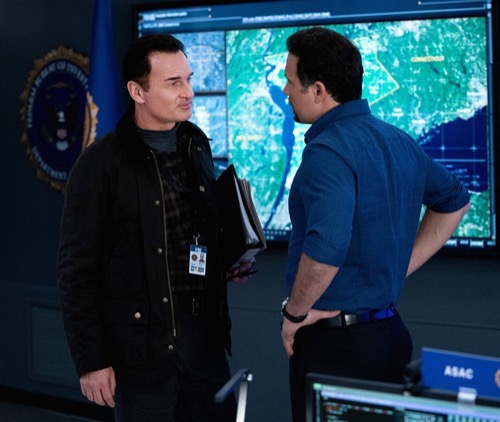 Tonight on CBS FBI airs with an all-new Tuesday, March 24, 2020, season 2 episode 18, “American Dreams” and we have your FBI recap below. In tonight’s FBI season 2 episode 18 as per the CBS synopsis, “Jess LaCroix joins the investigation about the kidnapped kids where the suspect is someone he arrested years ago.”

A bus full of kids is taken hostage on a bag road. Omar is having coffee with family. He gets a call and heads to the office. He is updated that an entire bus of kids as gone missing. Maggie is off undercover. Oh my heads out to the world area where they believe the bus may have been hijacked. An officer on the scene tells them that he knows the driver and he’s a good guy. They head out into the woods and find a glove and a pile of cell phones, explaining how communicating with everybody became impossible. Omar finds a body, it appears to be that of the driver.

Isobel arrives at the elementary school to meet with all of the parents to discuss with them the case. The team begins to investigate and question all of the parents. One mother mentions a strange incident from the other day was a green sedan was following the bus.

Back at headquarters, the team manages to get a video off of one of the smashed cell phones. It shows 2 gunmen getting on the bus with masks on. They also managed to get a video from street cameras of the green sedan. It belongs to a man named Carl who has a lengthy record. They track down his place of employment and head there. As soon as he sees them he tries to make a run for it. After the apprehend him they realize that he has nothing to do with it. Other footage comes in showing a man pumping gas with a green sedan and a local gas station and he is missing one finger like that of a gunman in the video.

Jess and his team arrive. They are there to help. They are trying to figure out why their man Givens would steal a whole bus of 26 kids. It looks like he either wants to get ransom or traffic them. Just starts to play shrink and it makes Jubal laugh a little but it looks like Jess is on the right track because there’s a woman connected to Givens. Omar and Marla go to visit the woman. They pretend to have good news and inheritance. The woman looks thrilled. After they leave, the phones are tapped and the team watches that she calls somewhere in the Bronx.

The governor’s office reaches out to the team. They received a ransom video. The gunman wants $1 million for the kids. Meanwhile, Omar and Marla see the man they’re looking for dumping some trash. Omar yells for him not to move as he points his gun but the man takes off after firing at him. After heading back into the building they realize that Omar got a shot off and at the man is bleeding. The team tracks his movement by his cell phone from their office telling Omar and Marla where to go. The signal brings them to a trash truck where they find their guy in the back. It appears that he has died from his wounds.

The team tries to figure out where the ransom video is taken now that one of their suspects is dead. They noticed the young boy in the video is signing something. They talk to his parents. They think he is saying the letters P and T. The father becomes extremely upset and can’t believe this is all they have.

Omar and Jess meet with the woman connected to Givens. She reveals that he’s been very political lately since getting out of prison, most likely from being around a bunch of skinheads. He talked about a man named T. The team gets to searching for more answers. They discover that a man named Tyler Kane must have the kids, a leader of a white nationalist group.

Omar and a member of Jess’s team, Kenny, go to the drop point where the captors expect to pick up the ransom money. There is a Phone there. Omar answers it and the white nationalist makes comments about him being Muslim. He demands Omar to drop the money and leave. Omar wants to see that the kids are OK, the man shows him a little girl but then he has a police chopper in the background and gets upset, hanging up.

Back at headquarters, Jubal figures out what PT means, play town. The entire team and back up head to an abandoned amusement park. They get their man but they don’t know where the kids are. He tells them it is too late. They use a set of bolt cutters to get in through a door and find the kids.

After the team gets outside and round up all the kids they realize they’re missing one, Owen, who signaled the P and T. They head to talk to the parents and the dad answers the door. They figure out that he cut a deal and paid $1 million for his kid leaving the other 25.