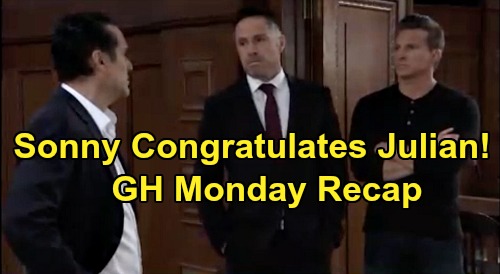 General Hospital (GH) spoilers recap for Monday, May 18, reveal that the teens will congregate outside at Oscar’s Meadow. Josslyn Jacks (Eden McCoy) will note that it has been a year since Oscar Nero Quartermaine (Garren Stitt) died, and that while she’ll always miss him, things are easier for her these days. Josslyn will apologize to Cameron Webber (William Lipton), Dev Cerci (Ashton Arbab), and Trina Robinson (Sydney Mikayla) for being so tied up with her journal lately.

Trina and Cameron eventually left, and Josslyn wondered what was up. Dev revealed that Cameron “liked” Josslyn, which stunned her. Josslyn thought that made no sense, since she had been a complete mess for a year since Oscar died.

Dev pointed out that when Josslyn “fake dated” Cameron to make Oscar jealous, it wasn’t so fake for Cameron. Josslyn didn’t know what she was supposed to do now.

Trina and Cameron walked along, saying that they had missed hanging out as a group of four. Trina said that it hasn’t been so bad just hanging out with Cameron, and he agreed.

Trina thanked Cameron for being there for her through everything she’s been through recently, and Cameron promised to always have her back. Cameron and Trina pinky swore to always have each other’s backs.

Meanwhile, at the courthouse, the judge chastised Nelle Benson (Chloe Lanier) for being late, and Nelle responded that she and her new husband were unavoidably detained.

The judge told Martin Grey (Michael E. Knight) to get his client under control, and he instructed that Nelle was not to address the court unless she was directly asked a question. The judge wanted to see the marriage license, which Julian pulled out of his suit coat without saying a word. The judge then called a brief recess to examine the license.

Michael, Carly Corinthos (Laura Wright), Willow Tait Corinthos (Katelyn MacMullen), and Diane whispered off to the side as everyone dispersed for the recess. Carly said that Nelle couldn’t have picked a worse stepfather for Wiley Quartermaine Corinthos (Theo and Erik Olson), but Diane said that they shouldn’t get ahead of themselves. Michael wondered what Nelle had on Julian.

Michael also wondered how Nelle found out about his wedding to Willow, and Carly admitted that Sasha Gilmore (Sofia Mattsson) had called to tip her off that Nelle knew about the marriage. Michael asked Diane what this all does to Nelle’s case, and Diane said that Michael and Willow looked great in comparison to Nelle and Julian.

In the foyer, Martin quietly raged at Nelle and Julian, saying that they could have given him a heads-up on their marriage. Nelle said that she and Julian just want what’s best for Wiley, which is to live with them.

Soon, Sonny Corinthos (Maurice Benard) came along and congratulated the couple and asked how TJ was holding up. TJ said that he was upset that he couldn’t give Mac Scorpio (John J. York) more pertinent details to help him solve the case.

Sonny walked off, then sent champagne to Molly, TJ, Jordan, and Curtis. Jordan excused herself and went to the bar to talk with Sonny alone. Sonny said that he was surprised that he hadn’t heard from Jordan. Jordan said that their collaboration was over, and that she could handle Mac and his investigation.

In another area of the restaurant, Ava Jerome (Maura West) was on the phone to Lucy Coe (Lynn Herring) about selling her penthouse. Cyrus Renault (Jeff Kober) ambled up and introduced himself to Ava, who wasn’t happy at all to meet him.

Ava quickly learned that it was Cyrus who wanted to buy her penthouse, and Cyrus wen on about how Ava was soon showing a new piece by Franco Baldwin (Roger Howarth).

Ava said that Cyrus wasn’t invited to the showing, and Cyrus brought up Ava’s troubled history, which Ava ignored. Ava blasted Cyrus for the death of Trina’s father, and Cyrus babbled on about how she was misinformed and that he just got out of prison.

Sonny walked up and overheard just as Cyrus was mentioning Ava selling her penthouse. Cyrus stepped away to make a call and Sonny approached Ava.

Sonny demanded answers from Ava about doing business with Cyrus, but Ava explained that she was selling her penthouse and didn’t know until that Cyrus wants to buy it.

Ava pointed out how horrible she felt for Trina, which softened Sonny a little. After a little bickering about Avery Corinthos (Ava and Grace Scarola), Sonny got a text from Carly saying, “Nelle married Julian.” Sonny took off.

Cyrus then returned to needle Ava some more. Cyrus mentioned the daughter that Ava shared with Sonny, and he said that if she ever needed help putting Sonny in his place, he was there for her. Ava said that she’d never sell him her penthouse, and that he shouldn’t mention her daughter again. Ava walked off and Cyrus laughed.

Back with Jordan, Curtis, Molly, and TJ, they were all talking happily except for Molly, who seemed distracted. Jordan took Molly aside and apologized to her for how she acted when TJ was kidnapped. Meanwhile, Curtis asked TJ how he was really doing. TJ admitted to having nightmares and trauma responses to the kidnapping.

Later, Jordan, Curtis, Molly, and TJ were talking at their table, when Jordan checked her phone for an update. TJ wondered if it was about Cyrus, and Jordan wondered what TJ knew about him. “Just what I read in the Invader,” TJ said. TJ knew that Jordan had exonerated Cyrus, and he and Molly both noted that that couldn’t have been easy for her.

When Jordan and Curtis were walking out, Cyrus approached them saying he wanted a word. Curtis told him to keep on moving, but Cyrus said that he could put Curtis’ skill set to good use if he wanted some business. Curtis refused, and Cyrus made some semi-threatening statement about how the health of Jordan and her family is important to him.

Back at the courthouse, the judge called the hearing to order. Diane gave a decent opening statement about how what’s at stake is what’s best for Wiley. Diane asked the judge to give sole custody to Michael, who was a successful businessman but not an absentee parent.

Diane explained that Wiley would live in a multigenerational home with loving people who keep him safe.

Martin gave his opening statement next, saying that what happened to Nelle was nothing short of a Greek tragedy. Martin told Nelle’s story about being in a car accident and left in the woods to give birth alone.

While Martin was talking, Nelle fiddled with her half of the heart pendant as she held it in her hand. Martin went on, blaming Brad Cooper (Parry Shen) for switching the babies.

As Martin went on about how Nelle had found love and got married, viewers saw never-before-seen flashbacks to Nelle telling Julian at Charlie’s Pub that she knew about how he covered up the baby switch and caused the accident that caused Lucas Jones’ (Ryan Carnes) coma.

In the flashback, Julian threatened to “deal with” Nelle himself, but Nelle said that she had sent an envelope to her attorney’s office with all Julian’s guilt detailed, and in the event something happened to her, the envelope would be opened.

Martin concluded his opening arguments, saying that Nelle and Julian would give Wiley a loving home. The judge then recessed for lunch, and Carly, Michael, and Willow headed to the Metro Court.

Diane stayed behind to make a call, and elsewhere Martin told Nelle and Julian that he was pleased with how things were going so far.

Nelle and Martin went off to rehearse her testimony, and Julian stayed in the courtroom alone after it was established that Martin was going to avoid putting Julian on the stand if at all possible.

Julian then turned to walk out of the courtroom as Sonny was walking in. “You’re not here to congratulate me,” Julian said. “Congratulations on marrying the person I hate more than you,” Sonny said. Sonny and Julian stared each other down.

At the gym, Sam McCall (Kelly Monaco) tried to egg Alexis Davis (Nancy Lee Grahn) into a workout, but Alexis was feeling down after being disbarred. Sam took a call, and Brando Corbin (Johnny Wactor) approached Alexis as she was kicking the punching bag in frustration. Alexis told Brando that she was brought to the gym against her will, and then Sam walked up.

Sam introduced Alexis to Brando, and Alexis mentioned Molly, which led to a few uncomfortable moments. Brando went to continue his workout, and Alexis said that Brando was cute. Sam said she didn’t see it.

Later, Sam approached Brando to apologize for giving him a hard time at his garage. Brando said that they could start over, or just do a silent nod from across the room. Sam said she’d take the second option.

Finally, Alexis got a call from Diane, who was still at the courthouse. Alexis wondered what Nelle had done now, and Diane dryly said, “Showed up in court with a new husband.” Alexis asked who Nelle had lured into marriage, and Diane said, “Julian.” Alexis was stunned.

There’s definitely a lot going on right now on General Hospital, so stay tuned! We’ll be sure to give you updates as more GH news comes in. Stick with the ABC soap and remember that CDL is your place for GH updates. We’ve got your current spoilers and daily recaps as well!