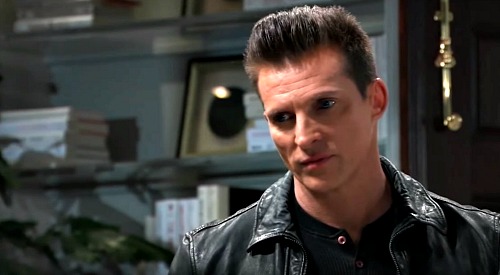 General Hospital (GH) spoilers reveal that Jason Morgan (Steve Burton) is a popular character and someone many fans adore. Jason’s never afraid to put his life on the line for the people he cares about. Since Jason’s such a solid guy, plenty of GH viewers are hoping he gets some gripping storylines down the road. Here are five things Jason Morgan fans want to see when new episodes return.

1. Freedom from Cyrus and romantic obstacles

As long as Cyrus Renault (Jeff Kober) is alive and kicking, Jason Morgan (Steve Burton) may have to keep his distance from Sam McCall (Kelly Monaco) and the kids. That’s no way to live! Jason deserves to be with his family, so Cyrus needs to be defeated ASAP.

Luckily, General Hospital spoilers say Sam could play a surprising role in this story. After an opportunity presents itself, Sam may be able to get rid of both threats to her time with Jason: Cyrus and her parole dilemma. It’d be nice to see Jason get his family back and stand united with Sam.

Once all the hurdles have been cleared, a marriage proposal seems like a natural next step. Jason and Sam will need to celebrate their love and freedom. There are bound to be more issues sooner or later, but Jason should take a break from all the chaos and pop the question!

We have no doubt that Jason will know just the right thing to say when he asks Sam to be his wife again.

Of course, a beautiful wedding needs to follow that romantic proposal. Whether Jason and Sam go all out or have a more intimate gathering, they deserve to remarry. “JaSam” shippers have been patiently waiting for this couple to lock in their future. Let’s hope Sam and Jason get a chance to say some marriage vows once more.

GH fans often see Jason in hero mode, but we don’t get to see his home life much. Part of that’s been due to Sam’s parole restrictions and the Cyrus danger, but things weren’t great before all that either. Jason could use more love scenes with Sam along with some extra family scenes.

It seems like Jason’s stories always involve keeping him apart from Sam in some way. In Jason’s new adventures once episodes return, maybe Jason and Sam could work as more of a team.

It’d be fun to see “JaSam” crack some cases and keep their love going strong. General Hospital has played the whole “we love each other but can’t be together” angle for long enough, so something needs to change.

What do you want to see for Jason Morgan once new episodes start airing again? Are you hoping Jason proposes, marries Sam and focuses on his family for a while? As other GH news rolls in, we’ll deliver updates.