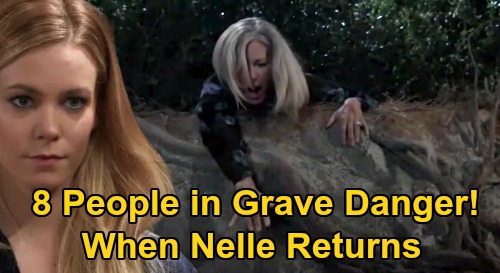 General Hospital (GH) spoilers tease that Nelle Benson Jerome (Chloe Lanier) will likely make a fierce comeback down the road. Without a corpse as proof of Nelle’s demise, it seems like a done deal that Nelle will return sooner or later. Of course, Nelle wouldn’t be Nelle if she wasn’t on a mission to stir up more trouble!

You can bet Nelle will want revenge on those who have wronged her, so let’s consider who’s in jeopardy. There are plenty of characters that Nelle could go after upon her return since pretty much everyone in Port Charles is an enemy.

However, there are some that are more at risk than others. Here are eight people who’ll be in grave danger when Nelle returns.

Naturally, Carly Corinthos (Laura Wright) is at the very top of the list. There’s no one Nelle hates more than Carly, so that’s already a good enough reason to target her. The fact that Carly let Nelle’s hand slip and covered up the cliff fall will provide two more. Nelle’s bound to cry attempted murder when she ultimately comes for Carly.

As Carly’s partner on the cliff cover-up, Jasper “Jax” Jacks (Ingo Rademacher) will also be in danger once Nelle makes a comeback. We can’t forget that Jax illegally bought Nelle’s kidney and caused a lifetime of health issues.

Plus, Jax and Carly are eventually going to hide the fact that Nelle is Nina Reeves’ (Cynthia Watros) bio daughter, so Jax will surely have to pay!

Just because Nina is Mommy dearest doesn’t mean she’ll get a pass when Nelle returns. Nina stabbed Nelle in the back during the custody battle – and Nelle certainly hasn’t forgotten that.

Losing custody forced this kidnapping plot, which led to Nelle’s cliff fall in the end. There’s also the matter of Nelle feeling abandoned once the bio mom truth is exposed, so Nina should prepare for Nelle’s fury.

Julian Jerome (William deVry) would’ve killed Nelle on the pier if Marcus Taggert (Real Andrews) hadn’t shown up. Do you think Nelle’s going to let Julian get away with nearly murdering her? No way!

Julian may think he can handle Nelle, but not if she’s got a vengeful plan – and she should indeed have one since she’s got this time away to plot.

Nelle’s “baby daddy” is someone else who may find himself in grave danger. GH fans know Nelle bashed Michael Corinthos (Chad Duell) in the head at the cabin, but that’s barely even scratching the surface of what she’s capable of.

Nelle feels like Michael is Carly’s puppet, so she’ll have no problem targeting him – especially since he’s standing in the way of Nelle and Wiley Quartermaine-Corinthos (Erik and Theo Olson).

Michael has declared Willow Corinthos (Katelyn MacMullen) to be Wiley’s “real mother” – and Willow’s embracing the role with her full enthusiasm. Nelle doesn’t trust anyone perfect and pure as Snow White Corinthos, so Willow will have a target on her back, too. Nelle’s going to want the title of Wiley’s mom, so Willow will be in peril when Nelle pops up again.

General Hospital spoilers say little Wiley could be at risk as well. Although it’s doubtful Nelle would hurt her son intentionally, she still poses a threat to her son. Nelle has no clue how to be a decent mom.

Wiley also has that heart condition, which could bring unexpected issues along the way. If Nelle gets her hands on Wiley again, his safety will definitely be a concern.

Nelle will probably be disappointed to learn that Brook Lynn Quartermaine (Briana Lane) survived that throat slashing. It seemed like seeing a bloody Brook Lynn on the floor brought Nelle joy!

Brook Lynn not only lived, but she tipped Michael off to the tracker and botched Nelle’s whole plan. It’s easy to imagine Nelle wanting to finish Brook Lynn off as an act of vengeance.

Those are the eight people who’ll be in the most danger once Nelle returns, so stay tuned! We’ll give you updates as other GH news rolls in. General Hospital spoilers say some shockers and shakeups are brewing in Port Charles.

CDL will have tons of other great General Hospital spoilers, news and updates for you, so be sure to drop by frequently.