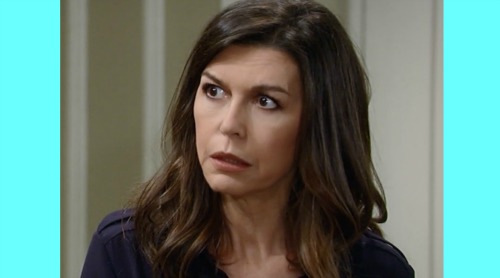 General Hospital (GH) spoilers reveal that the ABC soap has a problem – and it’s one that fans want fixed ASAP. GH viewers know Anna Devane (Finola Hughes) has always been an intelligent force to be reckoned with, as smart as anyone in Port Charles, maybe smarter. She’s Anna freaking Devane! This is someone who’s proven herself as smart, strategic and a woman who knows what’s really up.

So why has Anna become a shell of her former self? Why is Anna being so gullible when it comes to Peter August (Wes Ramsey)? We can understand that Anna wants to believe Peter’s innocent, but GH is going overboard here. Now that Anna’s fallen for Peter’s scheme to incriminate Liesl Obrecht (Kathleen Gati), many fans are suggesting that enough is enough.

On Twitter, GH viewers have been voicing their displeasure over this storyline and how Anna’s being written. They’re calling for changes and hoping something indeed shifts soon. “Really Anna you think Liesel would try to kill Franco come on TPTB stop making her so dumb and all for Peter he’s the worst thing to ever happen to her character!” one angry fan tweeted.

Another General Hospital watcher insisted, “Anna is supposed to be one of the smartest women on this show and it just honestly bothers me that they have her acting like a damn fool…” “Has Anna Devane EVER in her history been this off-base, naive and blind? Obrecht’s the culprit? Really?” one more fan griped. “Stop ruining Anna Devane!” said an especially frustrated viewer.

Obviously, there’s plenty of outrage over Anna falling for Peter’s lies hook, line and sinker. Anna needs to wise up and realize Peter’s not some fragile flower who needs protecting. He needs to pay for the things he’s done – and that includes killing Drew Cain (Billy Miller).

Peter robbed Scout Cain (Ella Ramacieri) of her father all to save himself. He can justify it all he wants, but only a monster would do that. Andre Maddox (Anthony Montgomery) also nearly died from the first brutal attack he faced. He later landed in another deadly situation along with Franco Baldwin (Roger Howarth). Just because Peter changed his mind about the hit doesn’t mean he didn’t order it!

Now Peter has no problem letting Liesl take the fall for his own crimes. Let’s hope Anna will eventually see the light and be the one to take Peter down. General Hospital spoilers, news and updates point to Peter’s inevitable comeuppance, so Anna will hopefully play a role in that.

How do you feel about how Anna’s being written? Do you want smart and savvy Anna back? As other updates emerge, don’t miss all our General Hospital spoilers and news posts here at CDL.