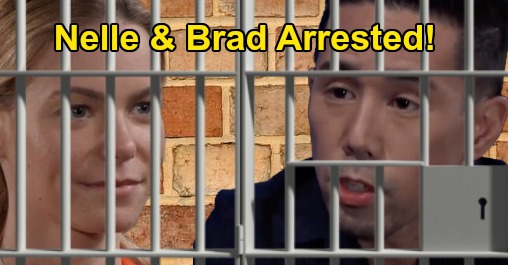 General Hospital (GH) spoilers tease that Brad Cooper (Parry Shen) will pay a steep price for agreeing to Nelle Benson Archer’s (Chloe Lanier) scheme. Nelle talked Brad into swapping babies with her on that fateful night and he’s been fighting to keep the truth under wraps ever since. The cover-up’s finally about to explode and burn Brad big time, so let’s talk about what comes next.

GH fans can expect Lucas Jones (Ryan Carnes) to unleash the truth at the current gathering, which is taking place at the Corinthos house. Despite Brad and Julian Jerome’s (William deVry) insistence that Lucas has got it wrong, he’ll shout that he’s not crazy and knows what he heard.

Once Michael gets updates on this shocking news, he’ll fly into a rage. In fact, Brad will face the full wrath of everyone at that party – except for Julian, who may not have much to say.

That’s because Brad will decide to keep his mouth shut about Julian’s involvement. He won’t think it’s a good idea to make matters worse for Lucas, who’ll already be in a fragile state.

Michael will naturally wants Brad to suffer for what he’s done. He’ll think it’s high time justice was served, so Harrison Chase (Josh Swickard) will likely do the honors. General Hospital spoilers say Brad will be arrested and thrown in lockup, which is where he’ll find Nelle.

It’s not entirely clear if Nelle will wind up behind bars because of her looming fight with Willow Tait (Katelyn MacMullen), the baby swap allegations or both. Either way, the baby switch would obviously bring the worst charges.

You can bet Michael, Carly Corinthos (Laura Wright) and all the other Corinthos family members will want Nelle sent back to Pentonville.

Of course, that’s not going to work for Nelle, who’ll be determined to keep her freedom by any means necessary. Brad will assume Nelle’s going to remain in the same messed-up boat, but Nelle will have other ideas. She’ll work hard to get off the hook for her crimes by blaming Brad, which could make Brad’s situation even worse!