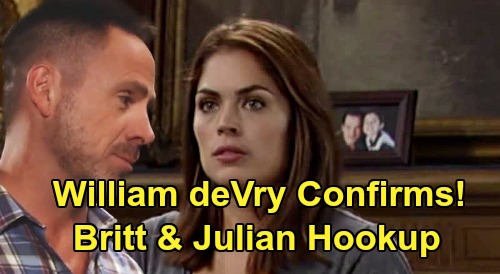 General Hospital (GH) spoilers tease that Julian Jerome (William deVry) is about to land in bed with someone surprising. Ever since Amanda Setton debuted as a Brook Lynn Quartemaine recast, she’s been in Julian’s orbit. Brook Lynn eventually had some bonding scenes with Julian and now they’ve got all this tension because of Brook Lynn’s blackmail plot.

It seems like the perfect storm for Julian and Brook Lynn to fall into bed together, so it’s only reasonable that Julian will sleep with Britt Westbourne (Kelly Thiebaud) instead. Wait, what?! Yes, you read that right. General Hospital spoilers say Britt and Julian are about to have a sizzling hot hookup. Why? Well, why the heck not!

Of course, we can’t rule out the possibility of a Brook Lynn and Julian hookup, too. Since William deVry confirmed the Britt hookup and that he filmed two love scenes a while back, there’s another one that’s still unaccounted for. That might be round two with Britt or perhaps a hookup with someone else like Brook Lynn.

Regardless, the idea of Britt and Julian getting wild in the bedroom feels completely random. Perhaps they’ll just be two vulnerable people who run into each other and form a connection – if only for the night. It doesn’t look like Britt will be sticking around very long, so this should be a one-night stand and nothing more for now.

Britt should be troubled and looking for comfort due to Liesl Obrecht’s (Kathleen Gati) arrest. As for Julian, he’s stressed over keeping his role in the baby swap drama under wraps. Julian might lose his relationship with Lucas Jones (Ryan Carnes) for good and could potentially be killed by Sonny Corinthos (Maurice Benard) if that shocker comes out.

Since both Britt and Julian will have a lot on their minds, they should be looking for steamy relief – just a chance to escape from their troubles and feel some temporary pleasure. Will anyone get updates on this hookup or will it be Julian and Britt’s dirty little secret?

Time will tell, but this is exciting news for GH fans looking for something different! Britt and Julian’s passion explosion is certainly unexpected.