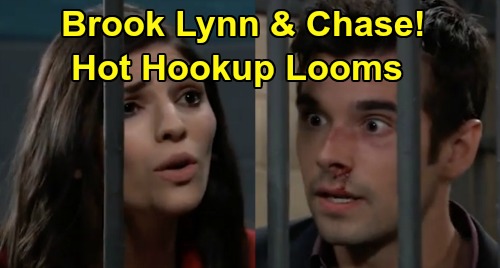 General Hospital (GH) spoilers tease that Brook Lynn Quartermaine (Amanda Setton) may be poised for a hot hookup with someone surprising. GH fans know Brook Lynn was in Julian Jerome’s (William deVry) orbit for a while, but they didn’t fall into bed together as many predicted. Julian slept with Britt Westbourne (Kelly Thiebaud) instead, but what about Brook Lynn?

Perhaps General Hospital writers are pushing Brook Lynn in another direction. Brook Lynn will need a love interest sooner or later, even if it’s a one-night stand that could potentially turn into something more. Let’s consider some hints and ponder what might be brewing.

GH viewers know Sasha Gilmore (Sofia Mattsson) feels like she has the solution for Michael Corinthos (Chad Duell). Sasha would like to be the one to marry Michael and help Wiley Quartermaine-Corinthos (Erik and Theo Olson), but she’d only hurt Michael’s chances in court.

Sasha’s been pushing for Willow and Michael to wed, but they’ve both shut down the idea for now. Harrison Chase (Josh Swickard) was perhaps the most outraged of all when Sasha brought it up.

Although we can’t rule out a Sasha and Chase pairing down the road, Chase is bound to be furious with Sasha once this actually pans out – and it most likely will.

Meanwhile, we’ve got Brook Lynn who’s now assaulted Chase for a second time. The first one was when Brook Lynn inadvertently bashed Chase over the head with a bottle at The Floating Rib.

Brook Lynn’s second attack came when she bloodied Chase’s nose at the Metro Court. She was aiming for Lulu Spencer (Emme Rylan), but she whacked Chase instead and landed herself behind bars.

This is just the kind of thing soaps do when they’re setting up a romance – or at least a hot hookup. There’s a thin line between love and hate! Tension like this can lead to a passion explosion, especially when characters have big problems and need a release.

Brook Lynn can’t seem to do anything right at ELQ, and she’s got all these music contract problems, too. When Brook Lynn inevitably sells her shares and they wind up in Valentin Cassadine’s (James Patrick Stuart) hands, she’ll have another reason to stress.

Throw in frustrated Chase having to watch Willow marry Michael and we’ve got the makings of some bedroom steaminess.