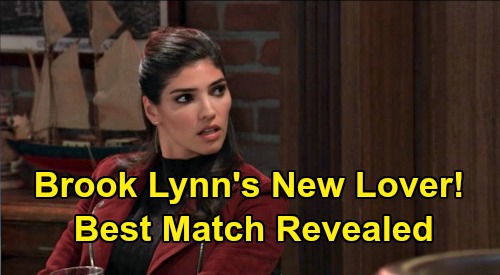 General Hospital (GH) spoilers tease that Brook Lynn Quartermaine (Amanda Setton) has some steamy options in Port Charles. Setton’s settled into the role nicely, so it’s great to have Brook Lynn back in the mix with the Quartermaine clan. Now that Brook Lynn’s been in town for a while, it’s time to start thinking about who her love interest should be.

GH fans know Brook Lynn’s blackmailing Julian Jerome (William deVry) and has been in his orbit from the start of this return stint. It seems like a fun way to set up a romance of some sort – or at least some hot hookups.

We know deVry filmed a couple of love scenes that haven’t aired yet, so there’s a good chance Brook Lynn will land in bed with Julian soon.

Of course, General Hospital writers could treat this as a passing fling and a way to get fans talking. Brook Lynn and Julian honestly don’t seem like they’d have solid potential as a long-term couple, but some fans out there may be rooting for them.

The heart wants what it wants, so we’ll see how that goes. At first, it certainly seems it’ll be more about physical attraction than anything.

Brook Lynn also shared some flirty scenes with Nikolas Cassadine (Marcus Coloma) recently. He was touched by Brook Lynn’s concern, especially since everybody else has done nothing but berate him. Nik deserved all the outbursts, but it was still sweet of Brook Lynn to see how Nikolas was feeling.

Ava Jerome (Maura West) noticed their vibe and suggested Brook Lynn would be a good backup if her plans for Elizabeth Baldwin (Rebecca Herbst) don’t pan out. Nik and Brook Lynn looked great together, so that might be an option GH pursues at some point. They could reconnect and see where it leads.

Brook Lynn also seemed to think Brando Corbin (Johnny Wactor) was a real catch during their brief interaction. Brando might be another romantic possibility for Brook Lynn eventually. Could you buy them falling for each other somewhere down the line?

Brook Lynn might find herself drawn back to “Dusty” sooner or later. General Hospital spoilers, updates and news hint at some shockers and shakeups in Port Charles, so you never know who’ll find love next!

No matter who Brook Lynn ends up with, she’s going to need a real love interest. Who do you think is Brook Lynn’s best match? Stick with CDL for exciting General Hospital spoilers, news and updates.