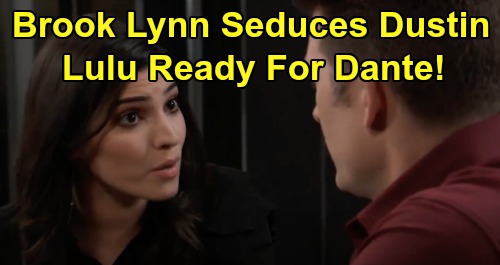 General Hospital (GH) spoilers tease that Brook Lynn Quartermaine (Amanda Setton) may have her eye on the one who got away. GH fans know Brook Lynn has a history with Dustin Phillips (Mark Lawson) – a history the writers wouldn’t have invented unless they planned to revisit it. We all know history tends to repeat itself on a soap – and that seems to be the direction this story’s headed in.

Brook Lynn clearly has a soft spot for “Dusty,” who appreciates her music and sees her passion. There’s a connection between them, and it’s only growing stronger based on their latest scenes together. General Hospital viewers watched as the former flames joked around and enjoyed working on a new song.

Dustin admitted he had fun – and he’s not having much of that with Lulu Spencer (Emme Rylan) these days. Lulu’s children have to come first, so she’s been busy trying to deal with out-of-control Charlotte Cassadine (Scarlett Fernandez) and all this custody drama. That hasn’t left much time for Dustin and their romance.

Fortunately, Lulu and Valentin Cassadine (James Patrick Stuart) recently reached an understanding. They finally seem to get that they have to work together for their daughter’s sake. Now that things are calming down, Lulu can shift her focus back to Dustin. She may hope to squeeze in more couple time, but she might find herself competing for Dustin’s attention.

During the week of May 11-15, General Hospital spoilers say Brook Lynn will get in touch with Dustin again. Dustin and Brook Lynn are spending an awful lot of time together, aren’t they? It’s suspicious and concerning. It feels like GH is pushing Dustin toward Brook Lynn instead, so this brings the potential for some cheating.

Dustin is a squeaky-clean character so far – the dull, mild-mannered high school teacher who’s been known to serve as a driver on the side. GH viewers will recall that Dustin’s displayed heroic behavior as well.

Dustin dove in after Charlotte when she jumped in the icy harbor. Dustin also showed up just in time during the shootout Josslyn Jacks (Eden McCoy) and the others were caught in.

We mention all this to point out that Dustin needs to screw up big time! Dustin can’t be that perfect; no soap character is. General Hospital needs to let Dustin make some mistakes – and landing in bed with Brook Lynn might be his first one. Will Brook Lynn seduce “Dusty” and convince him to betray Lulu?

If so, Lulu could end up devastated. On the bright side, Dominic Zamprogna (Dante Falconeri) is willing to come back on contract according to a new Soaps in Depth interview. If Dustin cheats and it leads to a breakup, it could leave Lulu ready and waiting for a reunion with recovered Dante.