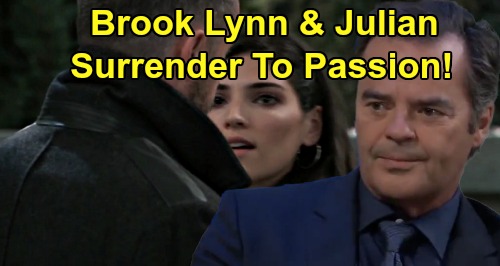 General Hospital (GH) spoilers tease that Brook Lynn Ashton (Amanda Setton) will continue to fume over her father’s decision. Diane Miller (Carolyn Hennesy) looked over Brook Lynn’s contract, but it’s pretty iron clad. There’s nothing that can be done except honoring the contract, waiting for it to expire or throwing money at the problem.

Of course, that last option is the one that’s most appealing to Brook Lynn. She tried to convince Ned Quartermaine (Wally Kurth) to buy her out of the contract, but he wasn’t keen on the idea.

Brook Lynn finally broke down and admitted that this new manager hit on her after she signed. He made it crystal clear that there were certain terms to be met that weren’t specified in the document.

Brook Lynn was hoping that would do the trick, but Ned stood by his choice and intends to let Amanda learn from this mistake. Is Ned making a mistake himself? Could there be more danger here than he realizes? Brook Lynn has seemed awfully uneasy about this situation. It feels like more than harsh treatment at this point.

Julian Jerome (William deVry) will likely sympathize with Brook Lynn when he gets updates on what went down. He probably won’t think it’s right for Ned to be so blasé about what Brook Lynn went through.

Ned feels like if he caves just this once, it’ll set a Quartermaine precedent. He doesn’t think they should be the family that admits defeat and gets walked all over. However, Julian has already started bonding with Brook Lynn and can relate to getting in a jam you can’t wiggle out of.

GH fans know Julian got stuck in Brad Cooper’s (Parry Shen) baby swap mess. He made an even bigger mess of things by trying to kill Brad, and now Lucas Jones (Ryan Carnes) is stuck in a coma.

Brook Lynn and Julian are both feeling vulnerable right now. They’re feeling alone in a world that’s unfair, so that’s a great reason for them to keep connecting. If there’s an opportunity for Julian to save the day, that’d be even better.

Perhaps Julian will come through for Brook Lynn if this pushy manager causes more drama. He may play the hero and get Brook Lynn out of trouble.

General Hospital spoilers say Julian will ignite a spark with someone in the coming weeks. He’ll feel passion where he didn’t expect it – and that’s where Brook Lynn probably comes in.

Brook Lynn might find herself feeling grateful for Julian’s support and eager to stick it to Ned. Hopping in bed with Julian could be partly about payback since Ned’s sticking to his guns on this contract situation.

It sounds like the excitement’s revving up in Port Charles. General Hospital fans won’t want to miss what’s in store. We’ll keep you posted as other GH news comes in. Stay tuned to the ABC soap and don’t forget to check CDL often for the latest General Hospital spoilers, updates and news.