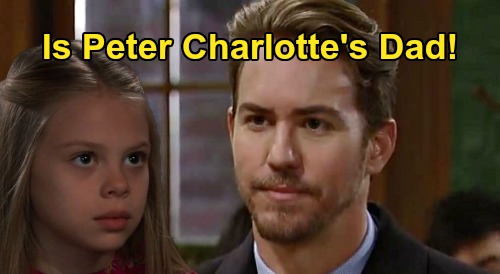 General Hospital (GH) spoilers tease that Valentin Cassadine’s (James Patrick Stuart) downfall is far from over. A devastating blow is headed his way, so there’s a good chance Charlotte Cassadine (Scarlett Fernandez) isn’t Valentin’s biological daughter. It would certainly be the ultimate way to make Valentin pay for his many mistakes. GH may take away what matters most to him.

Of course, this also brings up an important question. If Valentin isn’t Charlotte’s bio dad, then who is? Someone has to be Charlotte’s father, so that’s a mystery for General Hospital writers to unravel. It’s also a mystery we can ponder right now! Let’s consider one intriguing option and what it would mean for the canvas.

Could Peter August (Wes Ramsey) be Charlotte’s true father? Peter had a partnership with Helena Cassadine (Constance Stowers), who’s reportedly coming back and could bring some major revelations along with her.

Consider all the bonding Peter and Lulu Spencer (Emme Rylan) have done through work as well as his relationship with Maxie Jones (Kirsten Storms).

Peter has even bonded with Rocco Falconeri (O’Neill Monahan), so the show’s laid the potential groundwork for him to join this family in a sense. If Peter ends up sticking around and not getting killed off or sent to prison, what’s the plan for him romantically?

Maxie Jones (Kirsten Storms) will hopefully kick Peter to the curb for good, but he’ll still need a love interest. Peter’s only two options would probably be a “bad girl” who could put up with all the sinister things he’s done or someone with a reason to bond with him.

If Charlotte is Peter’s biological daughter, Lulu could be forced to put up with him – at least if he gets off the hook for his crimes. It could lead to a romantic connection between them somewhere down the line.

Dustin Phillips (Mark Lawson) has been kind of a bland character so far. Brando Corbin (Johnny Wactor) seems like a more interesting guy to keep around and could easily take Dustin’s spot in the mix.

If Dustin is phased out, that’d open the door for Lulu and Peter to get together. It would infuriate Maxie as a bonus and reignite some drama for these BFFs. Drama is always a good thing on a soap!

If Peter is Charlotte’s bio dad, that would fit with the kid angle GH constantly works. Peter’s always shown to be such a natural with children – just like he was with Violet Barnes (Jophielle Love) in those superhero and baddie scenes.

Could that be a setup for Peter to suddenly have a child of his own? It’s something to consider since Charlotte’s father bombshell is most likely coming. Peter tried to stop Valentin from taking Charlotte after the wedding blew up at Wyndemere.

That earned Peter a punch and potentially sparked a rivalry – one that would definitely intensify over a Charlotte shocker like this.