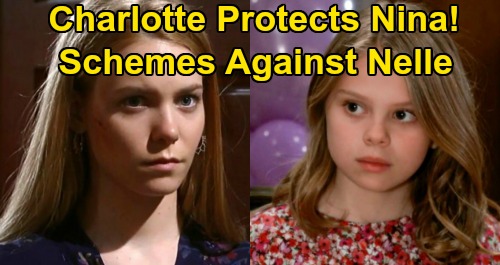 General Hospital (GH) spoilers tease that Nelle Benson Jerome (Chloe Lanier) has been connecting with Nina Reeves (Cynthia Watros) at Crimson, but there’s obviously some manipulation going on. Nelle may care about Nina in her own twisted way, but Nelle’s proven that she puts herself first. When it comes to any kind of relationship, it’s all about what Nelle can gain from it.

In this case, Nelle knows Nina could be her last shot at scoring custody of Wiley Quartermaine-Corinthos (Erik and Theo Olson). Nina may help Nelle pull off a victory, even if that means sharing custody with Michael Corinthos (Chad Duell). That’d still be good news since Martin Gray (Michael E. Knight) thought that was the best outcome Nelle could hope for.

Of course, General Hospital spoilers say Nelle and Nina will face the bio daughter shocker eventually. That should bring the two of them even closer, so it’ll be interesting to see how Charlotte Cassadine (Scarlett Fernandez) reacts. Could Nelle become Charlotte’s next target?

Although Charlotte liked Nelle as her nanny once upon a time, things have changed. Charlotte’s far more of a schemer now – and she’s already been burned by fake daughter Sasha Gilmore (Sofia Mattsson). It’d be reasonable for Charlotte to have concerns about Nelle hurting Nina.

Plus, Nina’s bound to clash with Valentin Cassadine (James Patrick Stuart) after the big daughter reveal. Valentin will inevitably worry about Nelle taking advantage of Nina, so Charlotte may worry, too. Like Papa, like daughter!

Charlotte’s already been following Valentin’s lead when it comes to bad behavior, so this could set a new scheme in motion. Will Charlotte come up with some plot to make Nelle suffer? Will Charlotte hope to turn Nina against Nelle and destroy their bond?

Charlotte might go for a plan like that if she thinks she’s protecting Nina. It’s doubtful a lecture or two will reform Charlotte from the troublemaker she’s become. Since Charlotte adores her former stepmom, you can bet she’ll be on guard when it comes to Nelle. This is the perfect opportunity to put Charlotte’s mischievous side to good use!