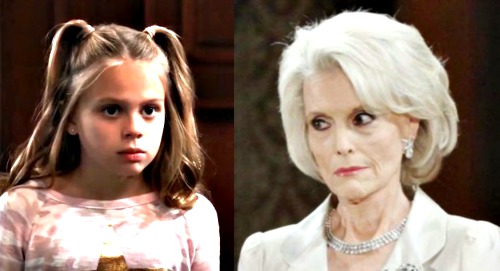 General Hospital (GH) spoilers tease that Charlotte Cassadine (Scarlett Fernandez) will have a few tricks up her sleeve. Charlotte will soon be back on the scene to stir up some trouble, but her parents will never see it coming. Valentin Cassadine (James Patrick Stuart) and Lulu Spencer (Emme Rylan) will both have other things on their minds, so it seems parenting just won’t be the priority.

Brook Lynn Quartermaine’s (Amanda Setton) return to Port Charles has reignited her feud with Lulu Spencer (Emme Rylan), so don’t expect that tension to go away.

GH fans know Lulu and Brook Lynn recently had a major brawl at the Metro Court, which Valentin caught on camera. If there’s ever an opportunity, Valentin always takes advantage of it. The non-Cassadine is a schemer to the core.

General Hospital spoilers say Valentin will continue to plot his ELQ takeover as well. It looks like there’s a reason Lulu and Brook Lynn’s conflict is heating up right now.

Lulu set some significant events in motion through calling attention to Brook Lynn’s blunder at the company. That ultimately led to Brook Lynn getting fired and deciding to sell her shares.

In a way, Lulu helped Valentin out! She just doesn’t know it yet, but she will down the road. Lulu surely won’t be happy about Valentin’s shady behavior, which is clearly never going to change. Since Charlotte’s so close to her papa, Lulu knows Valentin could easily be a bad influence on her.

Charlotte’s had moments of bullying and acting out, but the damage hasn’t been too bad so far. It seems like Charlotte’s been a fairly normal kid, but she could take a darker turn soon enough.

General Hospital writers laid the groundwork for it a while back when Charlotte cut up Sasha Gilmore’s (Sofia Mattsson) picture. They set up a “bad seed” angle – and now it’s time to show Charlotte’s true colors!

Kids are pretty good at watching and learning. General Hospital spoilers say that’s exactly what Charlotte’s been doing. Charlotte will catch Valentin off guard this spring when she does some plotting of her own.

After all, Charlotte’s learned from the best. Not to mention the rewrite made it so Charlotte is evil Helena Cassadine’s (Constance Towers) granddaughter.

GH might be paving the way for Charlotte to become a true villainess when she gets older. You can bet she’ll at least be the troublemaker teen one of these days. For now, Valentin’s about to find out that his sweet little angel has a dark side – one that could land him in hot water!