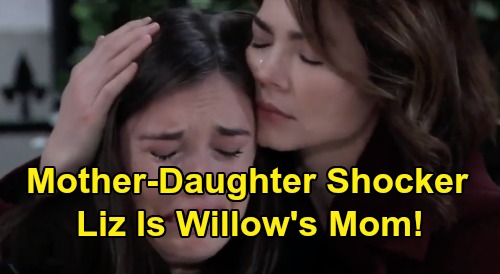 General Hospital (GH) spoilers reveal that a new theory is floating around – and it raises some interesting possibilities. Willow Tait’s (Katelyn MacMullen) mother is supposedly Harmony Miller (Inga Cadranel), but many fans aren’t so sure about that. Most new characters usually turn out to be connected to a prominent Port Charles resident.

Harrison Chase’s half-brother was revealed to be Hamilton Finn (Michael Easton). Peter August’s (Wes Ramsey) father was Cesar Faison (Anders Hove) and his mother is most likely Alex Devane (Finola Hughes) – although Anna Devane (Finola Hughes) claims him as her own since it hasn’t been proven. Now Marcus Taggert (Real Andrews) has been revealed as Trina Robinson’s (Sydney Mikayla) dad.

It’s easy to see why most viewers expect some twist for Willow – one that reveals her previously unknown connection to another PC resident. There’s still a possibility that Willow is Nina Reeves’ (Cynthia Watros) long-lost daughter. Nina doesn’t know who her biological child is – and Willow might be a good fit given their feud as well as how little we really know about her background.

However, there’s one big problem with that idea: It’s too predictable! General Hospital fans have speculated that from the get-go, so it won’t come as a huge shock if Willow is Nina’s bio kid. The big reveal would basically be meaningless since we’ve all been guessing it from the start. Who cares?

With that in mind, GH writers should think about including some surprises. Perhaps Willow could be connected to another Port Charles dweller instead. General Hospital viewers know Willow recently had some sweet scenes with Elizabeth Baldwin (Rebecca Herbst) in the cemetery. Willow was grieving for her son and lamented the fact that he was all alone when he died.

Liz assured Willow that she wasn’t alone and pulled her into a warm embrace. It was a moment that seemed almost motherly – and that got some fans thinking! There’s been some speculation about Willow possibly being a child conceived through Liz’s rape back in the 90s.

That plan would require some rewrites, but those happen all the time – as we’ve seen recently with Valentin Cassadine’s (James Patrick Stuart) not-a-Cassadine story. If General Hospital writers really wanted to make this work, they could. There are always storyline updates as we learn more news and character twists.

It’s a shame GH doesn’t give Liz more to do. Herbst is a talented actress who’s well-liked, so connecting Elizabeth to Willow might be a good thing. It’d be one more way to get Liz in the action.