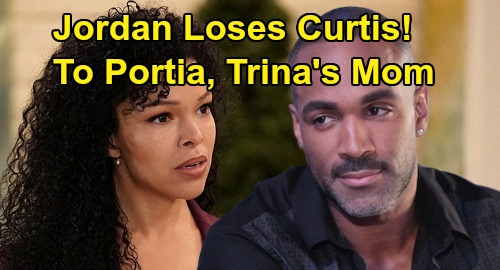 General Hospital (GH) spoilers tease that all the Cyrus Renault (Jeff Kober) drama could take a toll on Curtis Ashford (Donnell Turner) and Jordan Ashford’s (Briana Nicole Henry) marriage. They’ve already faced some issues, and more could be brewing depending on how all this plays out. It’s easy to imagine Jordan and Curtis drifting apart thanks to all the conflict.

Could that leave the door open to some new pairing possibilities? Marcus Taggert (Real Andrews) would be a no-brainer for Jordan, but it’s Curtis’ love life that most people seem to be interested in.

Ever since the role of Jordan was recast, this couple’s arguably lacked sizzle. Everyone’s going to have a different opinion on chemistry, but Curtis doesn’t seem to have much of it with Henry’s Jordan.

Of course, that happens sometimes when recasts come along. It’s not a dig. It just is what it is! Jordan might bring the heat with someone else just like Curtis could with a new woman.

If GH writers indeed intend to break them up, who might Curtis be paired with next? Perhaps Trina Robinson’s (Sydney Mikayla) mom would be a good fit.

Trina’s stepfather has been mentioned, but he probably won’t be in the picture long. Brook Kerr is set to debut as Dr. Portia Robinson on March 5 – and it seems likely she’s Trina’s mother.

If General Hospital is going to the trouble of casting Portia, a new love story is certainly an option. Based on Kerr’s look and age, we’d say she might be a great match for Curtis.

Since Curtis has interacted with Trina and Taggert, that could be a nice setup for him to land in Portia’s orbit. Could Curtis end up cheating with Portia? Will he simply split from Jordan and find comfort with Portia instead? Whatever the case, Portia and Curtis would look awfully good together.

Perhaps it’s time to pick out a couple name for these two and start shipping them! “Cortia” seems like the way to go. General Hospital spoilers, updates and news say there’s plenty of action on the way.

As Jordan and Curtis feel the strain of all the Cyrus chaos, it’ll be interesting to see if their marriage survives. One or both could stray if they aren’t careful.

Would you like to see Curtis with a new love interest? Do you think Portia would be a good match for Curtis or is there another option on canvas you’d prefer? We’ll pass along the latest news as more GH info emerges. Don’t miss all our great General Hospital spoilers and updates.