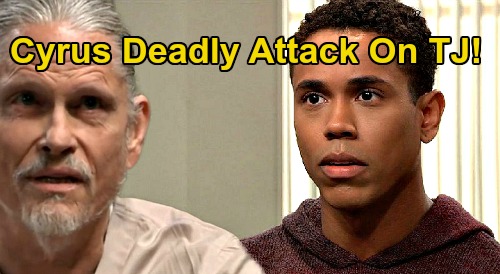 General Hospital (GH) spoilers reveal that Cyrus Renault (Jeff Kober) will keep up his revenge efforts. He’s clearly on a mission to make Marcus Taggert (Real Andrews) and Jordan Ashford (Briana Nicole Henry) pay. Cyrus went after Trina Robinson (Sydney Mikayla) to get to Taggert, so it’s reasonable to assume he may use T.J. Ashford (Tajh Bellow) to get to Jordan.

It makes sense considering we’re suddenly seeing a bit more of T.J. and Molly Lansing-Davis (Haley Pullos). Thanks to Molly’s proposal rejection, these two are sure to face issues for a while. There’s a lot of love left between them, but they need something to bring them together again. Could danger for T.J. be that something?

During the week of March 9-13, Molly will demand answers. She’ll confront Jordan Ashford (Briana Nicole Henry) and push her to divulge information, so the facts may line up here. It’s easy to imagine T.J. getting hurt and landing at GH. That might prompt confused Molly to seek info from Jordan and try to figure out what the heck’s going on.

Soon after this confrontation with Molly, Jordan will be a mess. She’ll pretty much be an emotional train wreck – and that would certainly be the case after an attack on T.J. Stella Henry (Vernee Watson) will also make a trip home that week, so it’s obvious something big will be up.

General Hospital spoilers and news say Stella will seek out Curtis Ashford (Donnell Turner), which could mean she’ll want updates on T.J. and his potential injuries.

GH fans know a bullet was planted in Dev Cerci aka Dev Corbin’s (Ashton Arbab) backpack at school. It was seemingly a message that Sonny Corinthos’ (Maurice Benard) loved ones could be targeted anytime, anywhere.

Since Cyrus is even more focused on Jordan and making her suffer, he could easily make T.J. his next target. It’d be simple to launch another mission that leaves T.J. fighting for his life.

Will Molly end up begging T.J. to pull through by his bedside at GH? Regardless, almost losing T.J. is a surefire way to change Molly’s mind about marriage. She’ll gladly let T.J. put a ring on it if he’ll just survive!