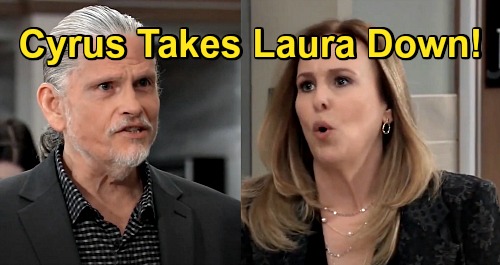 General Hospital (GH) spoilers tease that Cyrus Renault (Jeff Kober) is really working on getting a foothold in Port Charles. As GH viewers know, Cyrus now has Britt Westbourne (Kelly Thiebaud) as chief of staff at the hospital, and big changes have taken place, with new staff taking key positions.

And as Sonny Corinthos (Maurice Benard) and Jason Morgan (Steve Burton) recently theorized, Cyrus wants to run his drugs through the hospital, so he’s removing staff who have vast knowledge about how the hospital works.

Well, Cyrus doesn’t want to stop with just a hospital takeover. Cyrus has also been pestering Julian Jerome (William deVry) to sell him Charlie’s Pub, presumably for the same reasons he wants control of General Hospital.

If Cyrus is seeking ownership of Charlie’s Pub, he’s probably out there looking to buy other key establishments in Port Charles, too. It seems that Cyrus wants total control of the town.

General Hospital spoilers say that Cyrus has much higher aspirations than just controlling General Hospital, Charlie’s Pub, and the PCPD, where he’s got Jordan Ashford (Briana Nicole Henry) under his thumb.

Cyrus has had a weird obsession with Laura Collins (Genie Francis) for a while now, and even though Laura has been out of town on official business for several weeks, Cyrus has asked about her often, much to her loved ones’ dismay.

Perhaps Cyrus’ interest in Laura has less to do with an obsession with her than with the office of the mayor of Port Charles itself.

Since Cyrus seems to want to control everything in Port Charles, it would make sense that he’s been on the lookout for something that he can hold over Laura’s head, much like he’s done with Jordan.

In fact, we suspect that Cyrus would like nothing more than to blackmail Laura into making decisions as mayor that benefit him.

Or, perhaps Cyrus has realized that Laura is impossible to corrupt, and he’s looking to control the deputy mayor, who could take Laura’s place in the event Laura is ousted from her position as mayor.

And we can think of one area in which Laura is vulnerable, and it has to do with how she became mayor in the first place. GH viewers will remember that Laura was elected mayor after Spencer Cassadine (Nicolas Bechtel) introduced a virus into the system and rigged the election.

What if Cyrus were to find out about this, and he got Laura ousted as mayor? If Cyrus played his cards right and had ahold of the deputy mayor, then Cyrus could theoretically end up controlling the decisions of the new mayor.

That would be a horrible situation for everyone in Port Charles, and it would leave Laura horrified and disgraced. Plus, it would potentially get Spencer in loads of legal trouble for tampering with an election.

We’ll see if this ever plays out, but we expect that Cyrus would just love to have some control over the mayor’s office, and Cyrus probably knows that he needs to get rid of Laura somehow.

Do you think Cyrus will find about Spencer’s election tampering and use it against Laura? Stay tuned to the ABC soap and keep checking back with CDL for all the latest General Hospital spoilers, news, and our daily episode recaps.