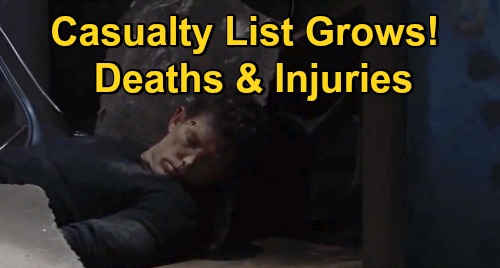 General Hospital (GH) spoilers updates tease that viewers are going to be in for some casualties and suspenseful moments in the aftermath of the big explosion at The Floating Rib. As GH viewers know, Cyrus Renault (Jeff Kober) manipulated Julian Jerome (William deVry) into planting and then detonating an explosive device at the restaurant when it was full of people, and so some big injuries are surely forthcoming.

In fact, General Hospital spoilers say we may even see two or more deaths out of the explosion. One glaring possibility based on a LOT of recent GH buzz is that Lulu Spencer (Emme Rylan) could perish in the explosion.

There are a lot of clues pointing to this possibility, including the fact that Emme Rylan is no longer with the show. Now, we can’t discount the possibility that there could be a recast of the role, but there are some other clues indicating that Lulu will either die or be in awful shape after the blast.

For one, GH spoilers say that Dante Falconeri (Dominick Zamprogna) and Dustin Phillips (Mark Lawson) will have a common goal in the immediate aftermath of the explosion.

That certainly sounds like Dante and Dustin may frantically try to rescue Lulu. Lulu could be trapped and not breathing or something like that, and there could be a mad scramble to get to her and save her life.

Then there’s the spoiler saying that Kevin Collins (Jon Lindstrom) will give Laura Collins (Genie Francis) terrible news in the episode to air on Wednesday, November 25th.

This could be that Lulu is completely gone, brain dead, or in a coma. Let’s just say that things aren’t looking great for Lulu here, so GH fans should brace for what might come.

But aside from Lulu, there are various possibilities for people who might end up seriously injured and on the casualty list in the explosion. GH spoilers say that Cameron Webber (William Lipton) will be injured in the blast – but it’s of course unknown whether he’ll be slightly injured or whether he’ll sustain life-threatening injuries.

Either way, this should really worry Elizabeth Baldwin (Rebecca Herbst) and Franco Baldwin (Roger Howarth) – who will both be in the blast as well.

Of course, the interesting thing here is that Franco is currently walking around with an inoperable brain tumor, and one wonders if he might sustain some head injury during the blast that might necessitate surgery to relieve pressure that could lead to the tumor being removed.

You never know how the tumor storyline and the explosion storyline could intersect.

Others who were in The Floating Rib at the time of the blast were Jason Morgan (Steve Burton) and his son Danny Morgan (Porter Fasullo).

Now, there is no indication at this point that Jason or Danny will perish in the explosion, although there certainly may be some tense moments for Sam McCall (Kelly Monaco) as she waits to hear whether Jason and her son are ok.

Of course, that doesn’t mean that Jason and Danny won’t be injured. We could see, for example, Danny have to be hospitalized for a serious injury, which would REALLY incense Jason and Sam once they find out that Cyrus was behind the explosion.

And for Sam to learn that her own father inadvertently detonated the bomb will be a real shocker when that information comes out.

Finally, there’s Dev Corbin aka Dev Cerci (Ashton Arbab), who was in The Floating Rib as well at the time of the explosion. Dev actually found the suspicious package right where Julian left it, and Dev dutifully reported it to the bartender.

Now if Dev and the bartender were to have gone back over to the package at the moment that it exploded…well, that wouldn’t bode well for Dev or the bartender.

Might we see Dev die? That would really rock the teen scene, and Cameron would probably feel some survivor’s guilt over the whole thing. And Trina Robinson (Sydney Mikayla) and Josslyn Jacks (Eden McCoy) would likely feel terribly for how they treated Dev when they last saw him.

It would make for a sad holiday season in the Corinthos house, too, as Sonny Corinthos (Maurice Benard) would have to deal with yet another loss.

Well, that wraps it up, and GH fans won’t want to miss the episode airing on Monday, November 23, to see just how the injuries and/or deaths stack up. Who, if anyone, do you think will die in the explosion?

Stay tuned to the ABC soap and remember that CDL is your go-to source for the latest General Hospital spoilers, daily episode recaps, and news.