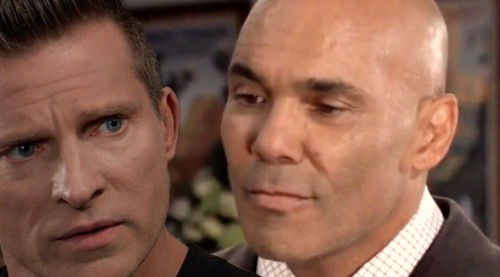 General Hospital (GH) spoilers reveal that many fans are hoping Marcus Taggert (Real Andrews) isn’t gone for good. The character recently met a grim fate, but there’s always the possibility of a comeback in the world of soaps. Steve Burton (Jason Morgan) is certainly open to the option of Taggert making a shocking return.

Before we get to that, let’s talk about Andrews’ message to GH viewers. On Twitter, Andrews addressed his departure from General Hospital and offered his gratitude to fans. He lightened up the mood of his somber exit with some funny words about his dog and included some fantastic photos. It’s nice to share a laugh after those heartbreaking goodbye scenes!

“RIP Taggert Thanks everyone for all your support I appreciate you all it was a great run I am extremely grateful for the opportunity. Although I appreciate your support more than you know I,mgreat Gods got me. It’s Diamond I am worried bout she depressed pray for her please,” Andrews tweeted.

Andrews naturally received plenty of support from GH watchers who were disappointed with Taggert’s demise. It seems unfair to bring Taggert back for such a short time and then just kill him off! Most of us are hoping there might be more to the story – and there definitely could be depending on how General Hospital writers want to take things.

Burton responded to Andrews’ departure announcement with a sweet message of his own. He’s rooting for Taggert to pop up again at some point, so could this be a hint about the GH character’s future? You never know! It wouldn’t be the first time a General Hospital star offered a little clue about what’s to come.

“You da man @realandrews a pleasure to have you back! Too short…anyone can come back from the dead right??” Burton said in his tweet. Andrews’ stint was indeed far too short – at least according to many disappointed Twitter users. Taggert’s abrupt exit has caused quite a stir, so there’s a chance that GH writers will undo the damage – even if that wasn’t the plan all along.

General Hospital spoilers suggest there’s always hope for a comeback. That’s especially true when there’s a built-in explanation for Taggert to be “dead” instead of dead-dead.

Taggert could’ve faked his death with Sonny Corinthos’ (Maurice Benard) help. It’d be a reasonable way to keep himself out of danger and protect Trina Robinson (Sydney Mikayla) until Cyrus Renault (Jeff Kober) was brought down.

Would you like to see Marcus Taggert again? Do you think Taggert possibly faked his death? As other updates roll in, don’t forget to stop by CDL frequently. We’ll have all the hottest General Hospital spoilers and news for you.

You da man @realandrews a pleasure to have you back! Too short…anyone can come back from the dead right?? 😎🙏🏻👊🏻 https://t.co/ywZlorjAEg