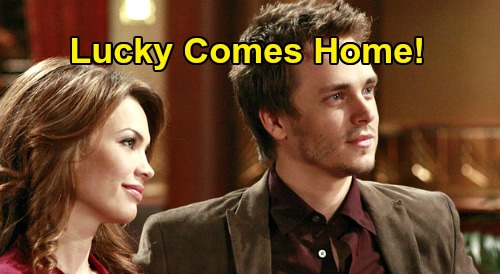 General Hospital (GH) spoilers reveal that Elizabeth Baldwin (Rebecca Herbst) and Nikolas Cassadine (Marcus Coloma) are slowly getting their friendship back on track. Liz was furious when she realized Nikolas drove Hayden Barnes (Rebecca Budig) out of town unnecessarily. To make matters worse, Hayden has completely dropped off the grid and could be dead for all they know.

Nikolas should be glad Elizabeth is even still willing to talk to him at this point. However, they’ve indeed been talking and bonding, which seems to be stirring up some jealousy for Franco Baldwin (Roger Howarth).

Of course, Nikolas is scheming to push Franco toward Ava Jerome (Maura West) and hopefully wiggle out of this marriage through the cheating clause.

General Hospital spoilers hint that Liz and Franco may figure out what Nikolas is plotting. That goes for Ava as well since she’s got a scheme of her own in play. Obviously, Elizabeth isn’t going to like the idea of Nikolas making another devious move.

Liz may pump the brakes on this friendship that’s budding again and push Nik away.

It’s just as well since Nikolas and Liz don’t have much more than friendly chemistry. If General Hospital wants to bring in someone who’d be a real threat to Liz and Franco’s marriage, they should bring back Lucky Spencer (Jonathan Jackson).

Lucky and Liz had their fair share of ups and downs, but they had a gripping love story and romantic chem worth raving about.

GH will need some big returns and bombshells once the show resumes production. Bringing Jonathan Jackson back as Lucky would certainly convince many fans to tune in again! Nevertheless, that’s not the only option to consider.

Although having Jackson back in the role would be ideal, a recast could work – especially if the new actor was tested with Liz in mind.

Franco and Liz are great together, but maybe they could use a genuine romantic interloper for drama’s sake. Nikolas just doesn’t seem like someone who could truly threaten “Friz’s” strong bond. Lucky, on the other hand, is someone who could actually stand a chance of winning Liz over.

On Twitter, there are always plenty of viewers rooting for Lucky and Liz to rekindle their romance. “I wish they would bring Lucky back to really mess up this Liz triangle with Nik and Franco,” one fan tweeted. “We know how this will play out if he [comes] running.” “I don’t care who they get but just bring Lucky back,” said another.

Do you think Lucky and Liz belong together? Would you like to see a reunion someday – preferably with Jonathan Jackson playing the role of Lucky? We’ll deliver updates as other GH news comes in.