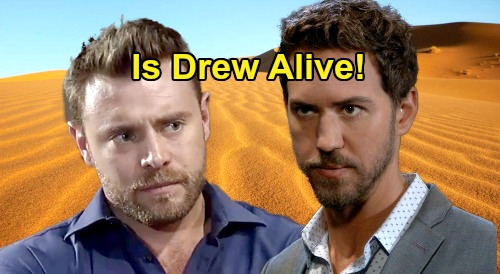 General Hospital (GH) spoilers tease that the jig is almost up for Peter August (Wes Ramsey). He’s on the verge of exposure, but some interesting clues leave Peter’s fate uncertain. If GH was going to write Peter out, why not just make him a full-blown villain? What’s with all the moments where Peter’s portrayed in a positive light?

Peter’s great with kids and has given helpful advice to Rocco Falconeri (O’Neill Monahan) as well as Wyatt Hoover (Patrick J. Gibbons Jr.) He also tends to have sob stories like how he never had a Christmas stocking before and other scenes that are meant to make us say, “Aww, poor Peter.”

Although Peter ordered the hit on Franco Baldwin (Roger Howarth) and Andre Maddox (Anthony Montgomery), he managed to stop deadly disaster in the end.

General Hospital could’ve had Jason Morgan (Steve Burton) or someone else intervene. They clearly wanted Peter to thwart his own attack – proving that he still had a conscience.

Even now, Peter’s obviously battling guilt and is quite uncomfortable with all this hero talk. If this was an exit story, wouldn’t General Hospital want to make Peter completely dark? Why not if a departure is the goal?

The fact that they’re trying to preserve Peter’s redemption on some level – or at least set up another round of it – could be a sign that Peter will stick around.

Peter’s done some horrible things, but most of them aren’t too big to overcome. Andre was stabbed, but he lived to tell the tale. Peter’s hitman was bad news anyway, so nobody cares. However, there’s one big problem here – and his name is Drew Cain (Billy Miller).

Drew was presumed dead in a plane crash that Peter was responsible for. It’s Peter’s fault that Drew’s family is suffering – especially Scout Cain (Ella Ramacieri), who’s now set to grow up without her biological father. Can GH fans really be expected to give Peter a pass if Drew’s DEAD?

Since that’s seemingly the only thing standing between Peter and another shot at redemption, perhaps Drew isn’t dead at all. A presumed death provides no firm proof, so the door was left open for Drew’s return.

It’s possible that General Hospital intends to bring Drew back in 2020 as a way to undo some of the Peter damage.

In fact, an alive Drew could save Peter from prison if that’s the route GH chooses to take. If Peter’s sticking around, he’ll need some strategy to get off the hook. There’s a chance Peter’s got Drew held captive somewhere in case he needs him as a last hail Mary.

Regardless, General Hospital spoilers say some Drew closure is needed – and Peter will need a miracle to beat the charges mounting against him! Will GH eventually let Billy Miller reprise the role or possibly bring in a recast? We’ll give you updates as other GH details emerge. Stay tuned to the ABC soap and don’t forget to check CDL often for the latest General Hospital spoilers, updates and news.