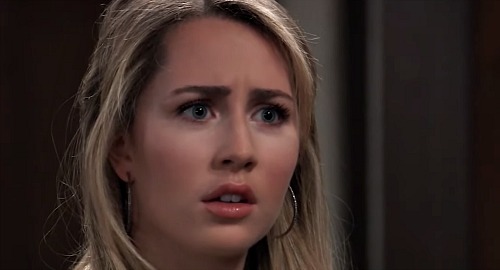 General Hospital (GH) spoilers reveal that Eden McCoy (Josslyn Jacks) was given a shock on set before the show halted production. Many GH fans were surprised by the remodel of the Corinthos home – and it turns out McCoy was surprised, too! McCoy wasn’t given a heads-up that it was coming according to an interview with Soap Opera Digest, so she was really thrown for a loop.

“I had no idea it was happening, that they were even redoing it, until I went upstairs and the living room was gone and it was a completely new place!” McCoy insisted. The General Hospital star admitted she likes the remodel and thinks it’s “cool” that it looks so different now.

Although McCoy approves of the changes, there’s certainly an adjustment period when it comes to new sets. “It’s exciting for us, but it’s new and weird at first!” McCoy said. “It’s strange, and on the first day I was working in the new set, Josslyn didn’t even say anything about it being different!”

Despite Josslyn’s lack of comment, McCoy feels certain that her character likes the remodel as well. She feels like it lines up with Joss’ style more than the old version of the living room. McCoy knows Josslyn better than anyone, so we’d say she’s right about that.

The debut of the new set meant adjusting McCoy’s script hiding spots! McCoy confessed that she stashes scripts anywhere they can be hidden when she’s filming. She gets sneaky by placing them under couch cushions, in drawers, behind the sofa and wherever else is convenient in that moment.

McCoy mentioned a bit of a blunder that happened the last time she filmed in the new Corinthos living room. Although McCoy is normally good about hiding those scripts, she forgot and left one in the middle of the table. That led to McCoy trying and failing to covertly remove it.

McCoy got busted when she came into the background and got the script out of there. “They had to redo the scene because they were like, ‘You’re not supposed to be in the scene!’” McCoy said. “Yes, I was like, ‘I know, but I left something!’”