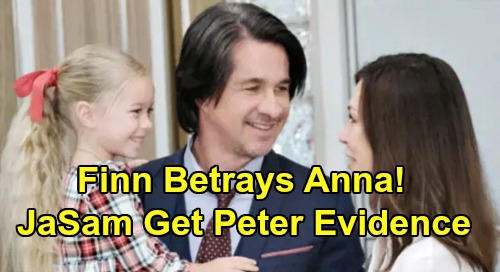 General Hospital (GH) spoilers tease that Anna Devane (Finola Hughes) will be in total denial about Peter August’s (Wes Ramsey) sinister side. She believes the evidence Peter is circumstantial and has no intention of taking him down. Anna’s desperate holding out hope that Peter has truly turned his life around. She can’t bear the thought of Peter being as awful as Robert Scorpio (Tristan Rogers) thinks he is.

Anna will unleash her wrath and argue that Robert’s letting his personal view of Peter cloud his judgment. She’ll feel it’s her responsibility to step up here and defend Peter against the naysayers.

Meanwhile, Hamilton Finn’s (Michael Easton) concerns about Peter will be on the rise. If Finn only had Anna to worry about, that’d be one thing. Anna’s a grown woman – the kind of woman who can certainly take care of herself! She’s proven that time and time again.

However, Violet Barnes’ (Jophielle Love) dropped into Finn’s life and changed everything. His daughter is his priority, especially since Hayden Barnes (Rebecca Budig) isn’t around. Hayden was willing to leave Violet behind to protect her from what she believed was a dangerous situation.

The danger wasn’t real, but Hayden didn’t know that. She made a huge sacrifice for Violet’s sake, so Finn won’t want to drop the ball by letting Peter get too close. He’s the only parent Violet has to rely on now.

With that in mind, Finn will be tempted to help Jason and Sam with their takedown efforts. They need proof against Peter if they want to make a deal, but they haven’t had much luck yet. General Hospital spoilers say Finn will consider ratting Peter out and spilling some secrets he’s learned.

While Finn’s mulling things over, he’ll have a fateful encounter with “JaSam.” He might’ve kept his mouth shut if he didn’t run into them at the exact moment his worries were revving up.

However, they’ll cross paths at just the right time – at least for Jason and Sam. They’ll score some ammunition against Peter thanks to Finn’s decision to betray Anna.

Of course, Finn will ask for Sam and Jason’s silence in return. He won’t want Anna knowing that he did anything that could put Peter behind bars. As you can imagine, this secret is going to explode in a big way sooner or later.

Finn’s ammo may not be enough to sink Peter, but anything helps at this point! This should be great news for Jason and Sam as they work toward their goal.