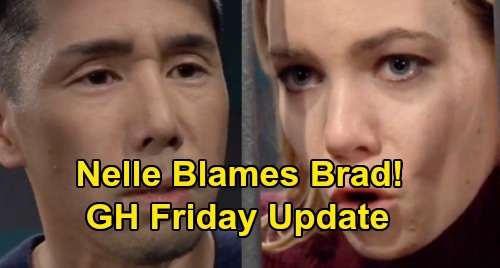 Nelle will glare at Brad with those crazy eyes of hers. She’ll rant about how Brad stole her child, so he’ll be truly stunned that she’d stab him in the back like this.

Nelle was the one who talked Brad into swapping babies with her. She actually had to work pretty hard to convince him that night. However, that’s not the story Nelle’s telling now.

Nelle claims to suddenly remember drifting in and out of consciousness. Nelle insists Brad came along and put his dead baby in her arms, so Brad will be furious over the liar’s betrayal.

Michael will fill Sonny in on Brad’s accurate version of events as well as the ridiculous version Nelle cooked up.

This isn’t the Corinthos clan’s first rodeo with Nelle. They know exactly how she operates, so none of them will believe a word out of her mouth – especially not Carly Corinthos (Laura Wright)!

Speaking of Carly, she’ll face a tricky situation on Friday. A heartbroken Lucas Jones (Ryan Carnes) will wonder what happens now. He’ll sit across from Wiley and struggle with the next painful steps.

Obviously, Lucas can’t keep Michael’s son. He can be in Wiley’s life and will need to help with Wiley’s transition into Michael’s home, but it won’t be the same. That’s just a fact that Lucas will have to accept. General Hospital spoilers say Carly will be supportive and kind as Lucas deals with this blow.

At GH, it’ll be Willow Tait’s (Katelyn MacMullen) turn to face the swap shocker. There’s really no easy way to say it, so Harrison Chase (Josh Swickard) will just have to rip off the bandage.

Chase will admit Michael was deceived about his son’s death. Nelle switched Jonah for the real Wiley, who died shortly after coming home.

It’ll slowly dawn on Willow that her own son didn’t make it. As for the Wiley she’s connected with, he’s not related to her at all. This double devastation will leave Willow in agony, so she’ll cry out and writhe on the floor.

Chase will move in close to embrace Willow and assure her they’ll get through this. It’ll be tough for Chase to see Willow in such a shattered state.

Next, Julian Jerome (William deVry) will have some news for Ava Jerome (Maura West). He’ll deliver updates on the baby swap chaos and confess that Wiley isn’t Willow’s son.

Ava will be taken aback by all the dirty details and will likely guess that Julian was in on Brad’s cover-up. They’ll discuss all the drama and the changes it’ll bring for all parties involved.

Curtis will certainly think Jordan’s leaving something out, so he’ll interrogate her again on Friday. Jordan will probably be exasperated at that point. She’ll be sick and tired of all the questions, so this could lead to more tension if Curtis won’t back off.

Vindictive Sonny and Jason Morgan (Steve Burton) will caught up in the baby switch aftermath, but they’ll get back to Cyrus business soon enough. Their storyline will lead to some conflict with Curtis in the coming episodes. Once other GH news develops, we’ll be sure to give you updates. Don’t miss all our hot General Hospital spoilers!