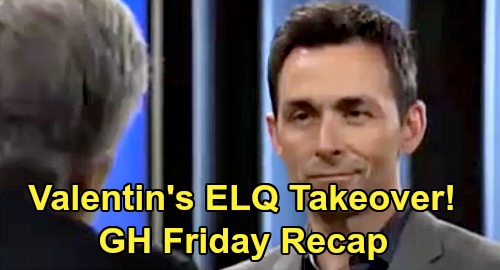 General Hospital (GH) spoilers recap for Friday, February 7, reveal that Ava Jerome (Maura West) arrived at the hospital to show her support for Laura Collins (Genie Francis). She made a big show out of hugging Nikolas Cassadine (Marcus Coloma) in front of the nurses’ station.

Turns out, Ava brought a list of rehab therapists for Laura, which she asked Nikolas to pass on for her. Before she left, Nikolas gave her a forced kiss, then told her to “go away, go far, go fast, go for good.” Ava was shaken and seriously affected by the kiss, but she didn’t reveal that to Nikolas.

Meanwhile, in Laura’s room, she talked with Lulu Spencer (Emme Rylan), who revealed that she was on edge about Dustin Phillips (Mark Lawson), and after some back and forth, Laura realized that it’s because Dustin had been the hero in the pier shooting.

Lulu confessed that she was scared of falling for another hero. Laura reassured her and told her that falling in love is always a risk. Lulu then left and Nikolas came in to see his mom.

Nikolas lamented that Lulu was still giving him the cold shoulder over what happened with Charlotte Cassadine (Scarlett Fernandez). Talk then turned to Spencer Cassadine (Nicolas Bechtel), and Nikolas asked his mother to speak to Spencer on his behalf.

Laura refused, but said that she’ll stand by Spencer while he comes to terms with what Nikolas did. Nikolas then insisted that Laura and Kevin Collins (Jon Lindstrom) move into Wyndemere for protection, but Laura refused and turned the discussion to Ava.

Laura wondered what Nikolas’ “arrangement” with Ava was really costing him. Nikolas assured his mother that he had no intention of staying married to Ava for the rest of his life.

Next, at the Metro Court, Nina Reeves (Cynthia Watros) briefly interacted with Valentin Cassadine (James Patrick Stuart), telling him that they need to move on from each other.

Valentin acted smug, like he knew that she still loves him. Martin Gray (Michael E. Knight) then approached, with Valentin remarking that Nina’s just pretending that she doesn’t love him.

Martin said that he was trying to prevent Valentin from taking the DNA test over the codicil dispute, but Valentin said he had no problem doing it. Martin disagreed, saying that the mere act of taking the test basically conceded that that codicil was legitimate.

Talk then turned to Valentin’s “pending acquisitions” which Martin said were going well, and that their “target” would soon be in position.

Over at Kelly’s, Brook Lynn Quartermaine (Amanda Setton) chatted with Dustin, and she apologized for the way she dumped him in the past. They talked about music, and Dustin noted that it’s clearly her passion and part of her DNA.

Later, Lulu met up with Dustin at Kelly’s and the two joked about Lulu attracting a lot of danger, then headed back to Lulu’s place for a quiet evening in.

Meanwhile, at the Quartermaine mansion, Ned Quartermaine (Wally Kurth) grumped at Michael Corinthos (Chad Duell) about an Invader headline, which was all about him and the mob wars.

Ultimately, they decided that Ned would join Michael in running the company, then they got interrupted by Nelle Benson Archer (Chloe Lanier), who complained about living in the dark, damp boathouse.

Nelle threatened to go back to Brad Cooper’s (Parry Shen) place and stay with him and Wiley Cooper-Jones (Theo and Erik Olson), but Michael happily announced that Lucas Jones (Ryan Carnes) was out of his coma. That threw Nelle for a loop, and Michael followed up with another cash offer for her stock. She promptly refused.

Over at Turning Woods, Lucas again flashed back to a snippet of his argument with Brad right before the accident. Lucas told Brad that it seemed like he was building up to a confession.

Brad and Julian Jerome (William deVry) looked worried, but Brad covered, saying that the accident made him put everything into perspective. Julian noted that Lucas should just focus on his recovery, as Willow Tait (Katelyn MacMullen) walked in.

Brad wasn’t thrilled to see Willow, who went on about how great Michael had been with Wiley while Lucas was in the coma. Brad and Julian then stepped out for a moment, and Julian warned Brad that all of Willow’s blabbering was going to trigger memories in Lucas, which was a risk to them both.

Meanwhile, Willow spoke to Lucas about how she was Wiley’s nanny for a while but that it didn’t end well. Willow expressed her deep concern for Brad, and she let Lucas know that she was always there to help.

Brad and Julian returned, and Lucas announced that he wanted to hire Willow to help take care of Wiley until he was back on his feet. Brad and Julian looked horrified.

Next, at Ava’s gallery, Nina showed up unexpectedly, and the women talked about Ava’s arrangement with Nikolas. Ava revealed the terms of the post-nuptial agreement – that if one of them cheats on the other, they forfeit everything.

Nina was nonplussed about that, but she was stunned to learn that Ava and Nikolas weren’t sleeping together as a married couple.

Ava then gloated that she could hold out as long as Nikolas could, and that all she had to to was wait for one indiscretion on Nikolas’ part…which she felt could come sooner rather than later.

Back at the Metro Court, Ned and Brook Lynn conferred ahead of their meeting with her producer Linc Brown (Dan Buran). Ned warned her to keep her cool and not to let him get under her skin.

Linc then appeared, and immediately referred to Ned as “Eddie Maine.” Ned brought up Linc’s past harassment of Brook Lynn, but Linc brushed it off, prompting Ned to hand Linc a check to buy Brook Lynn out of her contract.

Linc turned down the offer flat, saying that Brook Lynn could cut three albums for him according to her contract or simply stay quiet. Brook Lynn couldn’t contain herself any longer and stormed out, while Ned warned that his team of lawyers would eat Linc alive…or he could just take the check. Linc just sat there, and Ned left, noting that this was a one-time offer.

Back at the Q mansion, Michael got irritated with Nelle and asked her what amount of money she wanted. Nelle said she wanted more than he was willing to give, and that she’d just have to find a buyer who would treat her with respect. She then stepped out into the foyer and called Martin, who was still at the Metro Court.

Nelle told Martin that she was ready to entertain offers for that “item” she was thinking about selling. He said he’d be in touch, then he walked over to Linc, who was still sitting at the table from his conversation with Ned.

Linc reported to Martin that “I’ve turned the screws. Brook Lynn will give anything to get out of her contract.” Martin said he’d be in touch.

Martin then called Valentin and said, “You remember the acquisition you were wanting? We’re about to go shopping.” Valentin replied, “Wonderful. I do look forward to joining their family.”