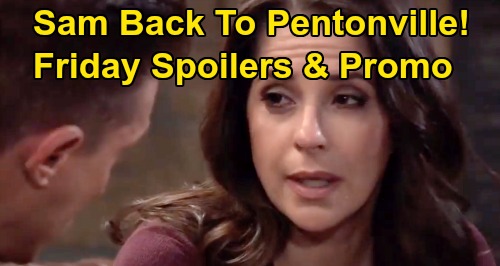 General Hospital (GH) spoilers for Friday, January 3, tease that Willow Tait (Katelyn MacMullen) and Harrison Chase (Josh Swickard) will rev up the romance. They’ll cuddle in bed after making love and reflect on coming together in 2019. It was a rough year for Willow, but Chase was a bright spot.

Willow will have a feeling 2020 is going to be even better, but GH fans know curveballs are always just around the corner! Ava Jerome (Maura West) was certainly just thrown a big one. When Valentin Cassadine couldn’t convince Ava to negotiate, he decided to shove her over the parapet and into the water below.

Luckily, Ava’s going to be just fine and will drop a major bomb soon enough. In the meantime, Charlotte Cassadine (Scarlett Fernandez) will find Valentin and ask what he’s doing out there. Valentin will undoubtedly just try to get Charlotte focused on this wedding, which is still in jeopardy.

Before Nina Reeves (Cynthia Watros) went upstairs to get dressed, she looked somber as she hugged Charlotte. Nina told Charlotte she loves her and always wants her to remember that. That seems like a sign that Nina’s revenge plot is still on, but Jasper “Jax” Jacks (Ingo Rademacher) will hope he can change her mind.

General Hospital spoilers say Jax will try to talk some sense into Nina. He’ll remind her of how this would affect Charlotte and will insist she’s better than public revenge.

Laura will suggest that whether they like it or not, they’re going to have to accept it. Does Laura mean the possibility that Nikolas Cassadine (Marcus Coloma) is alive or the fact that Charlotte’s issues are worse than they thought?

Regardless, two shocking guests will appear before the clock strikes midnight – so that’ll probably be Nikolas and a dripping wet Ava.

Until then, Ned Quartermaine (Wally Kurth) will worry about Brook Lynn Ashton (Amanda Setton). She’s dealing with a difficult new manager and a contract she really shouldn’t have signed.

Ned will hate that he can’t do more to help Brook Lynn, but sometimes being a good dad means stepping back. He’ll tell Olivia Quartermaine (Lisa LoCicero) that Brook Lynn made her bed and will have to lie in it.

Next, Michael Corinthos (Chad Duell) will continue his chat with Sasha Gilmore (Sofia Mattsson). He’ll allude to a favor he needs, but it seems it’ll mostly be a distraction for Sasha’s sake. Michael will do his best to keep Sasha’s mind off her troubles as they celebrate New Year’s Eve.

At Jason Morgan (Steve Burton) and Sam McCall’s (Kelly Monaco) place, they’ll have an emotional conversation about their future. Sam just had a meeting with her parole officer, which brought a crushing blow. She suggested this would be the last time she sees Jason, so she’ll have to explain on Friday.

Due to Jason’s mob connections and criminal record, it’s a problem that Sam’s with him. Sam will tell Jason she’s being sent back to Pentonville – that is, of course, unless they find a way to fight this. Jason will get in touch with Diane Miller (Carolyn Hennesy), but there may not be much she can do.

Sam might be able to work out a deal where as long as she steers clear of Jason, she can remain on the outside. However, that doesn’t help Jason and Sam’s relationship. The bad news is “JaSam” will be kept apart through another obstacle. The good news is this probably won’t last long.

General Hospital spoilers for 2020 point to “JaSam” starting the year on a high note – and it’s not the first of the year in Port Charles yet. Jason will make some stunning moves as he tries to fix this over the next couple weeks.