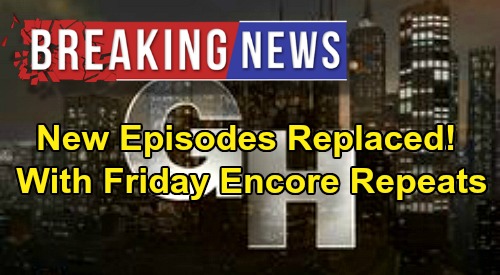 General Hospital (GH) spoilers reveal that the ABC soap has some blasts from the past in store. Due to COVID-19 aka the coronavirus, production has been suspended until the pandemic’s under control. Since the cast and crew can’t get back in the studio to film new episodes right now, GH is moving forward with a new plan.

The goal here is to make the new episodes last as long as possible. Naturally, an easy strategy to do that is by airing encore episodes along the way. The Young and the Restless is moving forward with a similar idea and now so is General Hospital according to Soap Opera Digest. GH will deliver “Flashback Fridays” from April 3 to May 22, so fans can expect some quality repeats.

It turns out General Hospital intends to make these episodes extra special with an introduction before the show. One cast member will come on and share more about what viewers can expect as part of the “Flashback Friday” fun. It should be interesting to see which episodes GH chooses and how far back they go.

For General Hospital’s first “Flashback Friday” offering, they’ll only rewind back to 2019. However, it’ll still be a good show! Laura Wright (Carly Corinthos) will give the intro for the 2019 anniversary episode.

If your memory’s a little fuzzy on what was in that episode, it was the one that focused on Gail Baldwin’s (Susan Brown) will. Wright will introduce the episode, explain what it’s about and kick off the show airing April 3.

Once Monday rolls around, there’ll be another brand-new episode of General Hospital as usual. These encore shows are only set to air on Friday as of right now, so you’ll still get plenty of new content throughout the rest of the week. This is a great way to keep the drama going rather than burning through all the episodes too fast.

Of course, CDL will have lots of exciting General Hospital spoilers to read up on. We’ll also have updates if other news emerges about scheduling changes. It’s important for fans to be kept in the loop on their favorite soaps and what’s happening!