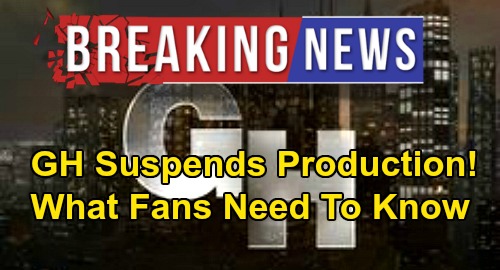 General Hospital (GH) spoilers reveal that there’s some big news to report regarding the ABC soap’s production schedule. Due to COVID-19 aka the coronavirus, the show’s taking precautions and will suspend production. General Hospital is the first soap to do so, but the others could certainly follow.

A representative for the show confirmed that GH would shut down starting Monday, March 16. They plan to suspend production through Friday, April 10. There’ll undoubtedly be a reassessment of the situation at, or before, that time so they can decide how to proceed. The safety of the cast and crew is obviously the priority. We want everyone to stay healthy!

Fortunately, General Hospital has likely already filmed enough episodes so that what you see onscreen won’t be interrupted. That could change if this production suspension is extended, but they aren’t expecting any broadcast interruptions at this point.

What that means is you can just keep watching GH as usual and hopefully it all work out. General Hospital has plenty of original episodes left, so they aren’t anticipating having to air any reruns. If that changes, CDL will deliver updates. You can always check out the latest news here as it becomes available.

Since the on-air schedule should proceed as planned, General Hospital spoilers say there’s much more drama ahead in Port Charles. The Cyrus Renault (Jeff Kober) chaos is getting worse by the second – especially since T.J. Ashford (Tajh Bellow) is still in grave danger. GH fans are eager to see Cyrus brought down, so let’s hope Sonny Corinthos (Maurice Benard) and Cyrus’ other enemies get the job done.

Naturally, General Hospital spoilers say there’ll be more Nelle Benson Archer (Chloe Lanier) mayhem as well. She’ll be up to her old tricks as this custody battle approaches, so Michael Corinthos (Chad Duell) had better be ready for anything. Nelle’s one crafty character and she’ll definitely pull out a few surprises down the road.

Again, General Hospital fans will able to watch the show like they normally do during this production suspension. As long as they get back on track when they’re supposed to, new GH episodes will coming. Stick with us for all the latest General Hospital spoilers, news and updates.