General Hospital Spoilers: How Long Will New Episodes of GH Last? – What Fans Should Know 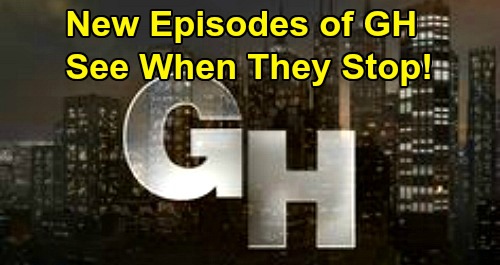 General Hospital (GH) spoilers tease that the looming custody battle is sure to bring some shockers. The drama’s heating up, so fans want to know: How long will the new episodes of GH last? Since the COVID-19 aka coronavirus crisis forced General Hospital to suspend production, the cast and crew haven’t been able to film fresh content since mid-March. That’s why GH will have to switch to all repeats soon.

The show’s already been doing Flashback Fridays to stretch things, and fans have noticed all the flashback padding as well. General Hospital has done their best to keep new episodes on the air for as long as possible. However, there’s only so much they can do with a pandemic going on. Since nobody can film, running out was inevitable due to their tape-to-airdate model.

Back in March, Deadline reported that GH would be able to air four original episodes a week through May 22. Since they’re airing classic episodes, that puts GH’s final new episode on Thursday, May 21. However, there was no mention of the flashback padding in the article.

When Nelle Benson Archer (Chloe Lanier) was revealed to be in possession of the other half of Nina Reeves’ (Cynthia Watros) heart pendant, it was promoted as ONE very special episode in Soap Opera Digest. Once it hit the screen, it had been split into two episodes through the addition of flashbacks.

There have been plenty of other lengthy flashback sequences. It seemed like Violet Finn’s (Jophielle Love) birthday party was never going to end! Does that May 21 airdate take the flashbacks into consideration? That Nelle episode confusion suggests the show’s been able to stretch beyond what soap mags and other publications thought.

Of course, current new General Hospital episode spoilers only go through May 21 right now, so we’ll see how it goes. It’s possible the show took these planned flashbacks into account when that final airdate was released, which could mean that’ll truly be the end of the road until production resumes.