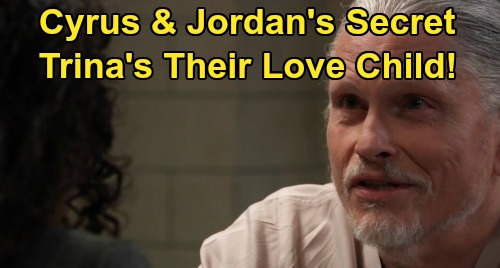 General Hospital (GH) spoilers tease that a new mystery may continue to unfold. Marcus Taggert (Real Andrews) is supposedly Trina Robinson’s (Sydney Mikayla) father, but is that really true? Was Taggert simply trying to protect his child from his enemies or is there more to the story?

Jordan Ashford (Briana Nichol Henry) is acting way too shady for this to only be about an undercover operation. She doesn’t want to tell Curtis Ashford (Donnell Turner) the truth. What’s Jordan hiding? Why would Jordan not want her husband to know the whole story so he can protect himself as well as protect her?

Jordan should’ve come clean immediately since Curtis’ life could be at risk. Cyrus Renault (Jeff Kober) and his men are incredibly dangerous, so it’s strange that Jordan wouldn’t trust Curtis right off the bat. What other secrets would have to come out for Jordan to spill what’s at the heart of this mystery?

Curtis Has Questions About Trina

Curtis asked Jordan if Trina was her daughter with Taggert, which Jordan denied. However, General Hospital characters have certainly been known to lie. Perhaps Jordan is telling a half-truth since she said she never had that type of relationship with Taggert. Maybe Taggert only helped Jordan cover up a deeper secret.

General Hospital spoilers, updates and news say Jordan and Cyrus were apparently very close. Cyrus seems quite upset over Jordan’s betrayal and mentioned that she was his right-hand woman. Was there more to Jordan’s relationship with Cyrus? Could Jordan have slept with Cyrus to keep her cover intact and gotten pregnant by him?

If so, Jordan might’ve concealed her pregnancy. She could’ve given the baby to Taggert to keep her out of Cyrus’ hands. It’s possible Trina is actually Jordan’s daughter and that’s what she doesn’t want Curtis to find out.

Cyrus Would Use Trina Against Jordan

If Cyrus had known about the baby, he would’ve hunted Jordan down years ago. Cyrus would’ve stopped at nothing to take that child from Jordan and raise her in his organization. He’s a lethal threat and definitely not father material.

Could the truth be that Jordan gave up her daughter to save her from Cyrus? Did Taggert and Trina’s mom adopt her? Trina could be Jordan’s secret love child based on these potential GH clues. This sounds like it could be an excellent shocker for Curtis to get to the bottom of.