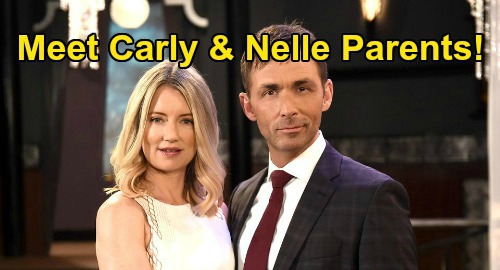 General Hospital (GH) spoilers tease that we’ve got some hot casting news to pass along. For starters, there’s a new Nelle Benson (Chloe Lanier) – well, sort of! Willa Rose will take on the role of “Young Nelle” in a special episode that’s set to air on April 8.

This episode will concentrate on Carly Corinthos’ (Laura Wright) past, so GH naturally needed a “Young Carly,” too. Luckily, they already had the perfect one in their cast. Eden McCoy (Josslyn Jacks) actually looks a lot like a young version of her TV mom and even has some of the same mannerisms. McCoy was excited to play this Young Carly role, especially since she’s so close to Laura Wright.

In a recent issue of Soap Opera Digest, McCoy talked about what the experience was like. She said, “It was funny because everybody says that Laura and I are the same, that I’m just like her and we talk the same and my delivery is the same…since I can do it without actually trying, when I was trying, it was just fun!”

McCoy also had high praise for her costars in this episode, including two current cast members in brand-new roles. Cynthia Watros (Nina Reeves) will take on the part of Virginia Benson while James Patrick Stuart (Valentin Cassadine) plays Frank Benson.

GH fans may recall that Bensons were Carly’s adoptive parents – and Frank was a particularly awful father who wanted nothing to do with Carly.

McCoy called it a “total dream” to work with Watros and Stuart in this episode. She suggested that viewers will be impressed with just how nasty Stuart makes Frank.

McCoy also appreciated getting to explore this heartbreaking part of Carly’s history. “It hits a very personal note for that character, and James [as Frank] was just terrible, but in the best way,” McCoy said.

Look for Carly to be crushed and resentful over Frank’s interest in his supposedly biological daughter, Nelle. General Hospital will set the stage for a big reveal that’s set to play out by the end of the episode – and we’re betting it involves that long-lost heart necklace half that Nina’s been wondering about.

McCoy promised plenty of clues involving Nelle and argued that this can’t-miss episode will set up present-day drama. In fact, that drama will extend well into the future. “Stuff is going to happen over the next few months that’s a really big deal, and this show is really crucial because it sets the scene,” McCoy teased.