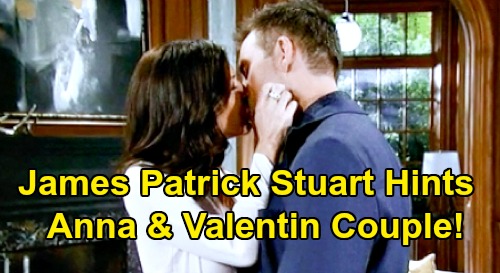 General Hospital (GH) spoilers reveal that Valentin Cassadine (James Patrick Stuart) is going to need a new love interest. Nina Reeves (Cynthia Watros) and Jasper “Jax” Jacks (Ingo Rademacher) are eager to see where their new romance leads, so Valentin’s out of luck for now. He told Nina he’d be waiting when she was ready, but Nina warned he’d be waiting an awfully long time.

With that in mind, perhaps Valentin should find love with someone else in the meantime. Could that someone be Anna Devane (Finola Hughes)? Hamilton Finn (Michael Easton) just left Anna, so there may not be much hope left for “Fanna.” This is the perfect opportunity to start up “Vanna” instead – and Stuart himself agrees!

In a new interview with Michael Fairman, Stuart opened up about all the drama Valentin’s been facing. Valentin was hit hard by the news that he isn’t a true Cassadine, so that’s forcing him to figure things out and make changes.

Will that include some updates to Valentin’s love life? When asked about the possibility of Valentin and Anna getting together, Stuart was all for it.

“Personally, I’m waiting for that,” Stuart said. “I hope so! There is a finesse and elegance to that woman, and not only that, there is an effortless to the connection between Valentin and Anna, if one can say that about one’s own coupling. I love to look at it!”

Stuart went on to say they “go together like a wink and a smile,” so he clearly sees real potential here. He had nothing but good things to say about Hughes and the chemistry she brings from her end.

Stuart also talked about how Valentin adores Anna despite the issues they’ve faced. He reflected on some recent warm moments between them and suggested a love story would be great if handled well.

“It’s floating out there waiting to be done,” Stuart insisted. “I know that everybody knows it. It’s just a matter of what the right away to go about in the writing would be.”

The GH actor even brought up Anna once again in a question about Nina and their reunion chances. Stuart believes Valentin will always love Nina, but he doesn’t think that would negate whatever Valentin might feel for Anna.

“He can be simultaneously in love with Anna whenever she’s near,” Stuart pointed out. It’s clear that Stuart’s going out of his way to make sure General Hospital fans are open to this Anna and Valentin pairing. That seems like a huge hint that it’s coming somewhere down the line.