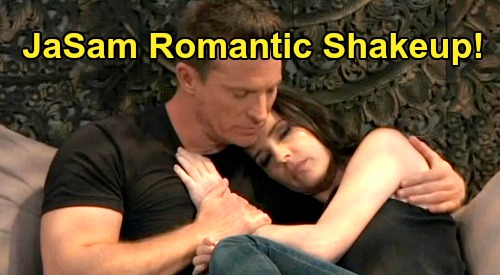 General Hospital (GH) spoilers reveal that Jason Morgan (Steve Burton) and Sam McCall (Kelly Monaco) are determined to score hard evidence on Peter August (Wes Ramsey). Unfortunately, that evidence has proven difficult to find so far. They need something concrete or else their deal with Robert Scorpio (Tristan Rogers) isn’t going to pan out.

GH fans can expect Hamilton Finn (Michael Easton) to betray Anna Devane (Finola Hughes) soon, but will the info he delivers be enough? Anna’s in denial about Peter’s guilt, but she’s right about one thing: the evidence she’s uncovered so far is circumstantial. There’s no smoking gun.

Peter was at Eurotech at the same time as the gunman, but that doesn’t really prove anything. Finn might have more secrets to work with by the time he spills, but those details may not be enough either. Peter is one slippery character, so GH may not make it that easy for Jason and Sam.

In a recent issue of Soap Opera Digest, General Hospital Co-Head Writer Chris Van Etten talked about what’s ahead for “JaSam.” It’s clear that everything hinges on Peter’s takedown, and there’s a lot at stake for this couple.

Of course, there’s been no confirmation on Wes Ramsey’s departure as Peter. If he’s exposed and it’s proven, it seems like Peter would land behind bars. Is there a chance Sam and Jason won’t score exactly what they need just yet?

When you think about how long the baby swap storyline’s dragged on, it’s not unreasonable to think this Peter story could continue far beyond February sweeps.

What happens if Robert isn’t satisfied with what they offer? Jason and Sam could begin to lose hope. General Hospital spoilers also point to Sam facing a snag with her current parole officer soon. It suggests that Sam will be on even thinner ice. Sam can’t risk going back to Pentonville for two years, so she really has to put her kids first here.

If “JaSam” are forced to follow the law and stay away from each other, could that lead to some temptation on either side? Being apart for so long can take a toll on a relationship. General Hospital writers always seem to find new obstacles to throw at Sam and Jason, so we can’t rule out some romantic interlopers if this storyline continues and Peter skates by for a while.

Jason and Sam may score what they need for Peter’s takedown eventually, but will they drift away from each other in the meantime? Do GH writers have some romantic shakeups in mind? We’ll give you updates as other news comes in. Stay tuned to the ABC soap and don’t forget to check CDL often for the latest General Hospital spoilers, updates and news.