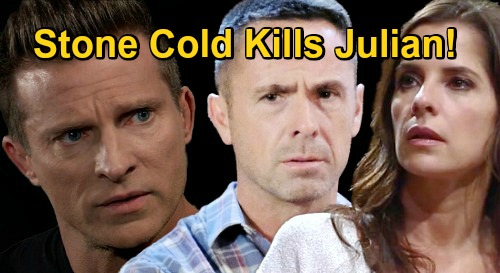 General Hospital (GH) spoilers tease that Julian Jerome (William deVry) is on his way out one way or another. As GH viewers know, Julian now has both Cyrus Renault (Jeff Kober) and Sonny Corinthos (Maurice Benard) furious with him.

Cyrus is incensed because Julian didn’t manage to get Jason Morgan (Steve Burton) killed, and Sonny is upset because he just learned that Julian was involved in keeping Wiley Quartermaine Corinthos (Erik and Theo Olson) away from Michael Corinthos (Chad Duell).

And if Sonny ends up having Julian killed, then it’s probably going to be Jason who does the killing. Even if Jason doesn’t actually pull the trigger, he’ll certainly know about and totally support what went down.

Of course, this particular situation could pose a big problem for Jason, because Julian is Sam McCall’s (Kelly Monaco) father. If Jason does kill Julian, then he’ll probably have to keep that fact from Sam.

Yet Sam’s not naïve, and she’ll know when and if Julian turns up dead that Sonny might have been behind it, especially when she learns that Julian was involved in the Wiley situation and the explosion at The Floating Rib.

Now, Sam isn’t the biggest fan of Julian’s by any means, but the thought of him being killed probably isn’t something she’s going to comfortable with, no matter what she learns that Julian did.

One would imagine that if Julian turns up dead, she’s going to wonder whether Sonny and Jason had anything to do with it, and so she’s probably going to start asking questions.

And if Jason goes all stoic and refuses to answer her questions in typical Stone Cold fashion, then that will basically answer the question for Sam. How will Sam be able to go on with Jason, knowing that he killed her father and Danny Morgan’s (Porter Fasullo) grandfather?

Something tells us that even if Julian ends up disappearing, Sam might fear that Jason and Sonny had something to do with his absence and fear that he’s dead. That doesn’t bode well for Sam and Jason’s relationship going forward.

Of course, Sonny and Jason might be indirectly responsible for Julian’s death – Sonny’s pretty smart, and he might figure that he can just sit back and wait for Cyrus to make his move and kill Julian.

But Sam might take issue with this, saying that Jason should have protected Julian considering that he’s her dad.

We’ll see what happens here, but Julian’s demise – however it happens – is certainly liable to have a big effect on “JaSam’s” relationship going forward, especially is Jason’s directly responsible for Julian’s death.

Do you think that Sam will blame Jason if something happens to Julian? Stay tuned to the ABC soap and don’t forget to check CDL regularly for the latest General Hospital spoilers, news, and daily episode recaps.