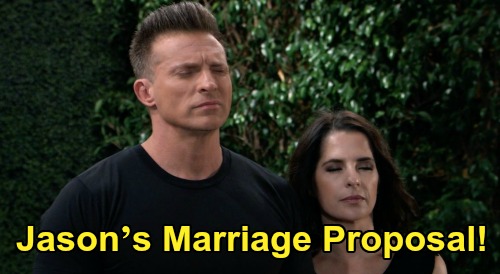 Unfortunately, Sam’s working this from the Molly Lansing-Davis (Haley Pullos) angle. It looks like Sam may get too close to the peril for Jason’s taste. During the week of March 30-April 3, Jason and Sam will have a fierce faceoff. It’ll bring Jason’s warning – most likely to back off all the Cyrus drama for Sam’s own good.

Sam may wonder if she’s just supposed to let Molly suffer. The man Molly loves is missing, so Sam will want to help reunite her sister with TJ Ashford (Tajh Bellow). General Hospital spoilers say Jason just won’t want Sam involved in anything risky. Jason will even push for a true separation for a while since this Cyrus situation will be spiraling out of control.

GH viewers can expect Jason and Sam to be miserable while they’re apart. Sam won’t want to wait on loving Jason and being free to have their happy family. However, there could be light at the end of the tunnel. General Hospital has delivered obstacle after obstacle since Jason and Sam got back together. They’re long overdue for some happiness, so could a summer engagement be on the way?

Jason and Sam will hopefully get this parole mess squared away by then. The same goes for all the Cyrus chaos. Naturally, the next logical step for these two would be for Jason to pop the question. They’ll need a way to celebrate their newfound freedom as a couple. It’ll be the perfect time for a beautiful marriage proposal and Sam’s resounding “yes.”

There’s no doubt in Sam’s mind about her future with Jason. “JaSam” will see infinite possibilities once they’re finally done with Delores Maloney (Andi Chapman) and the lingering effects of Shiloh Archer’s (Coby Ryan McLaughlin) influence. If Sam and Jason want a way to show a sign of commitment, they could pledge to be forever with this engagement news.